James Holmes' Parents Ask That He Be Spared Death 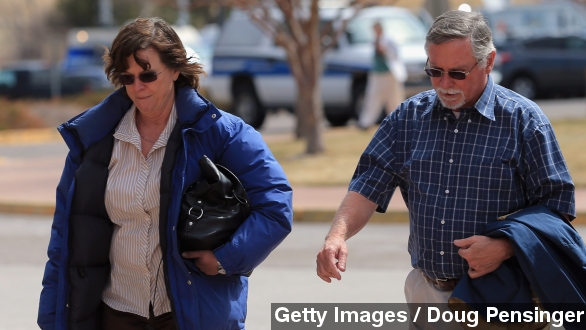 The parents of James Holmes say their son is mentally ill and ask that he be spared the death penalty.

The parents of James Holmes, the man facing charges for the 2012 mass shooting at an Aurora, Colorado, movie theater, have spoken out asking that their son be spared the death penalty.

Robert and Arlene Holmes wrote in a letter their son is mentally ill and asked that he be ordered to life in treatment instead.

"We love our son, we have always loved him and we do not want him to be executed," they wrote.

Holmes' parents asked the attorneys on both sides to negotiate a plea deal that allows Homes to live and avoids the trial process.

Holmes is accused of murdering 12 people and injuring 70 more. Prosecutors say he stockpiled weapons in the months leading up to the shooting.

Holmes originally offered to plead guilty in exchange for taking the death penalty off the table, but the prosecution did not agree, arguing the defense was withholding information.

In April, the district attorney announced the prosecution would be seeking the death penalty, saying, "In this case, for James Eagan Holmes, justice is death."

A month later, Holmes' attorney announced Holmes had been diagnosed with severe mental illness. His plea was changed to not guilty by reason of insanity.

In the letter, the Holmeses cited organizations such as the Murder Victims' Families for Human Rights and the National Alliance on Mental Illness, which condemn the use of the death penalty for those who are mentally ill.

Both organizations work to establish laws prohibiting the execution of people with severe mental illnesses, which MVFHR calls a human rights violation.

This is the first time Holmes' parents have spoken publicly about the attack.

In the letter they said they had avoided the media in the past because they didn't want to bring any attention to themselves. They wrote, "The focus should be on the injured and their healing."

Currently 9,000 jury summonses are being delivered for the trial, which is expected to take place over several months beginning in May or June. The presiding judge is allowing the trial to be broadcast live.