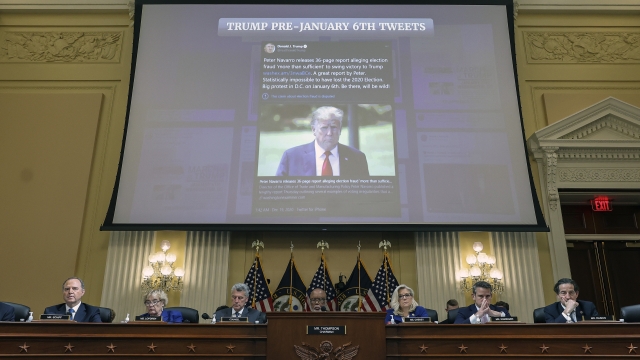 The vote for Trump's testimony comes as the panel produces new evidence of Trump's state of mind as he refused to concede his loss to Joe Biden.

A dramatic call to accountability for former president Donald Trump ended what could be the last public appearance of the Jan. 6 committee.

"I am offering this resolution, that the committee direct the chairman to issue a subpoena for relevant documents and testimony under oath from Donald John Trump in connection with the Jan. 6 attack on the United States Capitol," Republican Rep. Liz Cheney said.

The motion to issue an 11th hour subpoena to the former president passed unanimously.

The move came after the committee laid out a detailed summary of the evidence collected so far during its investigation, including never-before-seen video of lawmakers evacuating the day of the insurrection to undisclosed locations – filmed by House Speaker Nancy Pelosi's daughter Alexandra, a documentary filmmaker.

"Paul Irving, your sergeant at arms, will inform you that their best information is that they believe that the House and the Senate will be able to reconvene in roughly an hour," Pence said in the recording.

Since the last hearing, the panel has continued to bring in witnesses and people involved in the effort to keep President Trump in office.

There was also a first look at the hundreds of thousands of pages of Secret Service communications and documents obtained by the committee – some of which make clear its agents were repeatedly tipped off to the potential for violence on Jan. 6.

"Evidence strongly suggests that this testimony is not credible," Rep. Schiff said.

In addition to new details, committee members again played pre-recorded testimony from aides and White House officials showing that Trump knew he lost the election but would not concede, despite repeated legal setbacks.

"I told him that it was crazy stuff," former attorney general William Barr said. "They were wasting their time on it, and it was doing a great, great disservice to the country."

"We have a company that's very suspect; its name is Dominion," Trump said. "With a turn of a dial or the change of a chip, you can press a button for Trump, and the vote goes to Biden."

The committee emphasized Trump alone was at the center of the efforts to overturn the 2020 election results.

While Thursday's hearing may have been the committee's last, it will still deliver its final report on the investigation by the end of the year, likely after the midterm elections, which are now less than a month away.