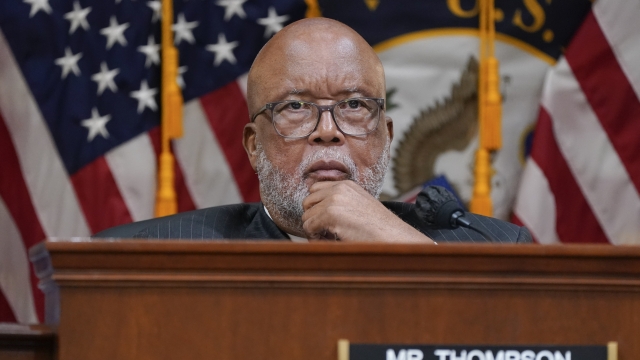 It was a rare action for the panel to issue a subpoena to an executive branch department.

The House committee investigating the U.S. Capitol attack subpoenaed the Secret Service on Friday night for text messages agents reportedly deleted around Jan. 6, 2021, as the panel probes Donald Trump's actions at the time of the deadly siege.

Committee Chairman Bennie Thompson, D-Miss., said in a statement that the committee understands the messages had been "erased." Thompson outlined an aggressive timeline for production of the documents by Tuesday.

"The USSS erased text messages from January 5 and 6, 2021, as part of a 'device-replacement program,'" Thompson said late Friday.

He said the panel "seeks the relevant text messages, as well as any after action reports that have been issued in any and all divisions of the USSS pertaining or relating in any way to the events of January 6, 2021."

The Secret Service did not immediately respond to a request for comment.

The subpoenas come hours after the nine-member panel received a closed briefing from the watchdog for Department of Homeland Security, which oversees the Secret Service. The watchdog briefed the lawmakers about his finding that the Secret Service deleted texts from around Jan. 6, according to two people familiar with the matter.

For the Jan. 6 panel, the watchdog's finding raised the startling prospect of lost evidence that could shed further light on Trump's actions during the insurrection, particularly after earlier testimony about the president's confrontation with security as he tried to join supporters at the Capitol.

It was a rare action for the panel to issue a subpoena to an executive branch department. The committee's letter was to USSS Director James Murray, who is set to retire at the end of the month.

While lawmakers were tight-lipped about what they heard, the closed-door briefing with the inspector general, Joseph Cuffari, came two days after his office sent a letter to leaders of the House and Senate Homeland Security committees stating that Secret Service agents erased messages between Jan. 5 and Jan. 6, 2021 "as part of a device-replacement program." The deletion came after the watchdog office requested records from the agents as part of its probe into events surrounding the Jan. 6 attack, the letter said.

The committee had originally sought the electronic records in mid-January and made an official request in March for all communications received or sent from DHS employees between Jan. 5 and Jan. 7, 2021.

Thompson, the Democratic chairman of the House Jan. 6 panel, told the Associated Press on Friday that the committee is taking a deeper look at whether records may have been lost. "There have been some conflicting positions on the matter," the Mississippi lawmaker said.

The private briefing was confirmed by two people familiar with the matter who spoke to The Associated Press on the condition of anonymity to discuss it.

The Secret Service insists proper procedures were followed. Agency spokesman Anthony Guglielmi said, "The insinuation that the Secret Service maliciously deleted text messages following a request is false. In fact, the Secret Service has been fully cooperating with the OIG in every respect — whether it be interviews, documents, emails, or texts."

He said the Secret Service had started to reset its mobile devices to factory settings in January 2021 "as part of a pre-planned, three-month system migration." In that process, some data was lost.

The inspector general has first requested the electronic communications on Feb. 26, "after the migration was well under way," Guglielmi said.

The Senate Committee on Homeland Security and Governmental Affairs, which has jurisdiction over the Department of Homeland Security and the Secret Service, is also expecting a briefing from the inspector general about the letter, according to a person familiar with the committee's discussions who was not authorized to discuss them publicly.

Ohio Republican Sen. Rob Portman said in a statement that he was "deeply concerned" by the OIG's recent letter. Portman, the ranking member on the Homeland Security committee, added "It is essential that the Department be transparent with its inspector general, Congress, and the American public."

The Jan. 6 committee has taken a renewed interest in the Secret Service following the dramatic testimony of former White House aide Cassidy Hutchinson, who recalled what she heard about Trump's actions the day of the insurrection.

Hutchinson recalled being told about a confrontation between Trump and his Secret Service detail as he angrily demanded to be driven to the Capitol, where his supporters would later breach the building. She also recalled overhearing Trump telling security officials to remove magnetometers for his rally on the Ellipse even though some of his supporters were armed.

Some details of that account were quickly disputed by those agents. Robert Engel, the agent who was driving the presidential SUV, and Trump security official Tony Ornato are willing to testify under oath that no agent was assaulted and Trump never lunged for the steering wheel, a person familiar with the matter told the AP. The person would not discuss the matter publicly and spoke on condition of anonymity.

With evidence still emerging, the House Jan. 6 committee on Friday officials scheduled its next hearing to take place Thursday in primetime. The 8 p.m. hearing, which is the eighth in a series that began in early June, will take a deeper look into the three-hour-plus stretch when Trump failed to act as a mob of supporters stormed the Capitol.

It will be the first hearing in prime time since June 9, the first on the committee's findings. That earlier hearing was viewed by 20 million people.