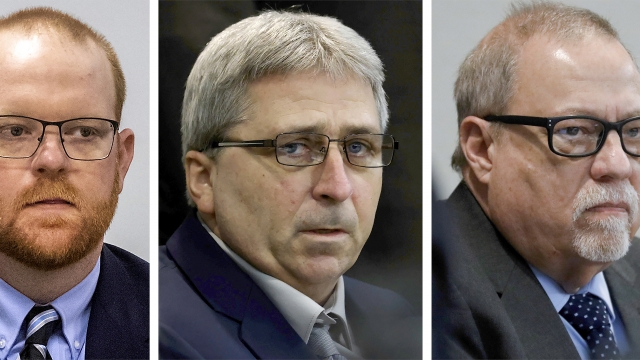 A judge in coastal Georgia has set a sentencing date early next year for the three men convicted of murder in the killing of Ahmaud Arbery.

Father and son Greg and Travis McMichael and their neighbor, William "Roddie" Bryan, are set to be sentenced Jan. 7, according to an order signed Monday by Superior Court Judge Timothy Walmsley. At the November trial, the three white men were convicted of murder and other crimes in the Feb. 23, 2020, killing of the 25-year-old Black man.

The McMichaels armed themselves and pursued Arbery in a pickup truck after seeing him running in their neighborhood just outside the Georgia port city of Brunswick. Bryan hopped in his own truck and recorded video on his cellphone as he joined the pursuit, capturing the moments when Travis McMichael blasted Arbery with a shotgun.

All 3 Men Charged In Ahmaud Arbery's Death Convicted Of Murder

Malice and felony murder convictions both carry a minimum penalty of life in prison. The judge decides whether that comes with or without the possibility of parole. Even if a chance of parole is granted, a person convicted of murder must serve 30 years before becoming eligible. Multiple murder convictions are merged for the purposes of sentencing.

Murder can also be punishable by death in Georgia if the killing meets certain criteria. Prosecutors chose not to seek the death penalty in the case of Arbery's slaying.

Each count of aggravated assault carries a prison term of at least one year but not more than 20 years. False imprisonment is punishable by a sentence of one to 10 years in prison.