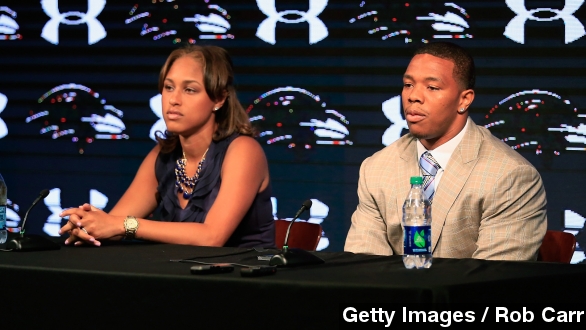 After Monday morning it’s clear Janay Rice believes her husband Ray should be back playing in the NFL by now.

“At the end of the day, he’s a football player. And that’s what they really should be focused on,” Janay Rice told NBC.

And that’s certainly not the only thing she and NFL commissioner Roger Goodell disagree about.

NBC’s exclusive interview with Janay is the first time she’s publicly spoken out on TV since TMZ released the elevator video purportedly showing her then-fiancee Ray Rice knocking her unconscious.

Janay’s mother sat beside her as she answered questions from Matt Lauer about the night of the incident and the fallout since.

“Have you seen the second tape,” Matt Lauer asked.

“No. I refuse. I refuse. I’m not going to let the public bring me back there,” Janay responded.

The running back was suspended two games when the incident first came to light, but the NFL bumped that to an indefinite ban after the second video, showing the alleged assault, became public.

On Friday, U.S. District Judge Barbara S. Jones ruled Rice did NOT lie to the NFL about the elevator incident.

That came regardless of reports indicating Ray Rice told a different story to the Baltimore Ravens and the NFL before the video came out.

In her ruling on the appeal of the suspension, Judge Jones said, “Rice did not mislead the Commissioner at the June 16th meeting, and therefore, that the imposition of a second suspension based on the same incident and the same known facts about the incident, was arbitrary.”

Shortly after that decision was made, the NFL general counsel made its disapproval clear. Stating, “No part of Judge Jones's decision questions the Commissioner's honesty or integrity, nor his good faith consideration of the issue.”

Janay says no instances of abuse have happened since that video. Ray Rice is now eligible to return to the NFL, but will first need to sign with a team. He’s currently a free agent. Ray Rice’s portion of the NBC interview airs Tuesday.