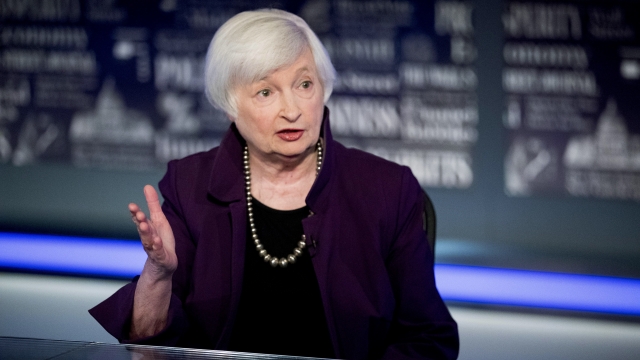 Biden nominee Janet Yellen has served as chair of the Federal Reserve and headed the White House Council of Economic Advisers.

President-elect Joe Biden has selected a familiar face to lead his Treasury Department: Janet Yellen, the former chair of the Federal Reserve.

The nomination is historic. If confirmed by the Senate next year, Yellen would be the first woman ever to head the Treasury Department.

"We've made good progress, but we have further to go to regain the ground lost in the crisis and the recession," Yellen said November 2013 at her confirmation hearing.

But Yellen is no stranger to breaking barriers in the male-dominated economics field. She was also the first woman to chair the Federal Reserve — a role she held from 2014 to 2018.

Before that, she chaired the White House Council of Economic Advisers in the late 1990s.

With her nomination to head the Treasury, Yellen is also poised to become the first person to hold the government's top three economic jobs.

As treasury secretary, Yellen would be charged with helping lead the nation's economic recovery from the pandemic.

She has voiced support for government-backed aid for workers and businesses negatively affected by the coronavirus.

"While the pandemic is still seriously affecting the economy, we need to continue extraordinary fiscal support," Yellen said earlier this year in an interview with Bloomberg Television. "We need support for the economy from both monetary and fiscal policy. Monetary policy has already done a huge amount."