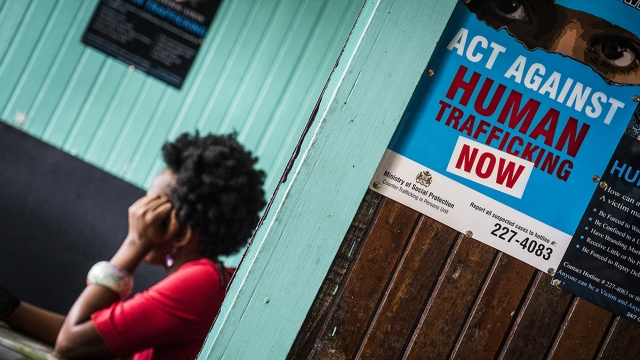 It’s called the blue campaign. "Wear Blue Day" is designated to raise awareness of human trafficking and that awareness continues throughout January. It’s led by the Department of Homeland Security.

"Human trafficking is often a hidden crime. It often involves a use of force, fraud or coercion to some type of labor or commercial sex act," said Brandi Baynum, program manager at DHS Blue Campaign.

People often confuse smuggling with trafficking. Smuggling involves a crime that takes place crossing borders, requires travel, and is voluntary. Money is often exchanged by the person to cross a border. While trafficking is a crime against a person, it doesn’t always include a border crossing, and the victim is forced or coerced.

"We're in Chicago right now, and we have people here who have never left the city limits, who have experienced human trafficking. So there's none of that movement that's necessarily required. One of the scary things about social media and technology is that people can build trust and relationship with having never met a young person or never met the other individual," Dobney said.

80% are forced into labor in industries such as agriculture or restaurants — 20% into sex work.

"Human trafficking is so prolific in our country and it's so easy to look past it because it very quickly blends into kind of everything else," Dobney said.

Sextortion often involves kids or teens who are coerced into sending explicit images online then being extorted for money to keep them private.

Some don't even realize they're being exploited. April Bentley of Milwaukee says  she was 14 years old when she was trafficked for sex, after she befriended another woman.

After escaping that life, Bentley now educates others through her non-profit organization R.U.B.I.E.S., which works with girls at risk of exploitation.

"We want you to grow and to know that you are purposed, you are valuable and we value you as a person," Bentley said.

While human trafficking can happen to anyone of any age, the UN says globally one in every three trafficked survivors is a child. Girls are mainly trafficked for sex and boys are forced to work. Courtney Bunn is a human trafficking therapist at Chicago’s Children’s Advocacy Center. She’s seen traffickers use psychological coercion more often than physical force. And she treats kids not just in the city.

"That image that people have of somebody in chains, you know, tied to a bed, something like that, just isn't the most common situation. More so what we're seeing is somebody in close relationship being the facilitator of the exploitation. So could be a romantic partnership, it could be a familial relationship, and then using that relationship to exploit somebody's vulnerabilities," Bunn said.

"I go all the way out to the western suburbs and then the northern suburbs to Schomburg to far down south. It's not restricted to one socioeconomic status, it's not one neighborhood. It really can exist anywhere and in places that you might be surprised about," she continued.

Where can people go for support?

"If it’s a child would definitely recommend calling the DCFS hotline. There is also a National Human Trafficking tip line hotline, which is helpful to have. And then lastly, I would say one of our community partners, the Salvation Army "Stop It" Program, has a 24 hour support line as well," Bunn said.

Activists say it takes a community to not only educate and prevent human trafficking but also to support survivors. One of those numbers is the National Human Trafficking hotline at 1(888) 373-7888.