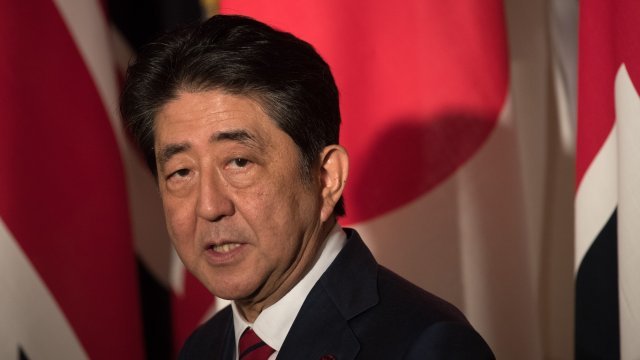 Prime Minister Shinzo Abe has been caught up in several corruption scandals, prompting calls for his resignation.

Abe is tangled in several corruption scandals that accuse him of using his government authority to secure preferential treatment for his friends and allies. The prime minister has denied he's done anything wrong.

Now, Abe's approval rating is hovering in the 20-30 range, and a former prime minister from his party is suggesting he should step down. It's exactly the kind of domestic turmoil Japan can't really afford right now.

Japan has a vital national security interest in the prospective talks between President Donald Trump and North Korean leader Kim Jong-un. Abe's expected to push Trump to keep a hard-line stance on Pyongyang during those talks.

President Trump tweeted there was a "good chance" North Korean leader Kim Jong-un would agree to denuclearize the Korean Peninsula.

Japan's also interested in pushing back on trade with the U.S., particularly the Trump administration's harsh, new steel tariffs. Other major U.S. allies were exempted from those levies — but not Japan.

Abe has cultivated a close personal relationship with Trump, but so far that hasn't given him much of an edge on these issues. If Abe's forced to step down, fears that Japan is being passed over by the U.S. would only grow.