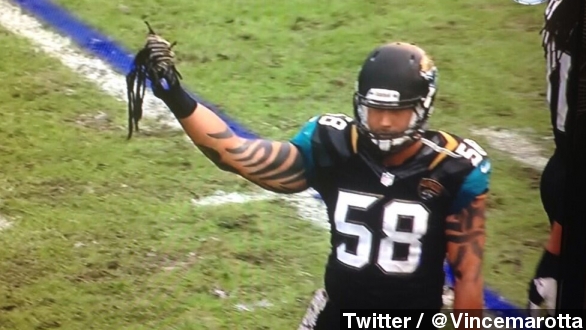 When you have 22 grown men going head to head on a football field, someone is bound to get hurt. But this Sunday it wasn't an ankle injury or concussion that has people talking.

"They tried everything, including some hair pulling. Jason Babin."

That's Jason Babin, who usually is the Jacksonville Jaguars defensive end, though today he took on the role of barber for the Arizona Cardinals' Andre Ellington. (Via Bleacher Report)

It's actually legal to tackle someone by their hair in the NFL. A rule passed in 2003 said that when hair extends outside of a player's helmet it is considered a part of the uniform. (Via SportsGrid)

ESPN wrote in 2012 that 180 players were sporting long locks. A majority of them were offensive players, and it's understood that if a player is close enough to grab your hair, they are close enough to make a proper tackle.

So what happened to Ellington's dreads after Babin tossed them on the ground?

According to this picture from Twitter, they were put inside a plastic bag and given back to Ellington. Ellington later tweeted saying they weren't ripped from his head, just torn. (Via Twitter / @CardsMarkD)

He then assured fans it wasn't as painful as it looked and that he plans to stitch them back in. As for Babin, he and the Jaguars lost the game 27-14.