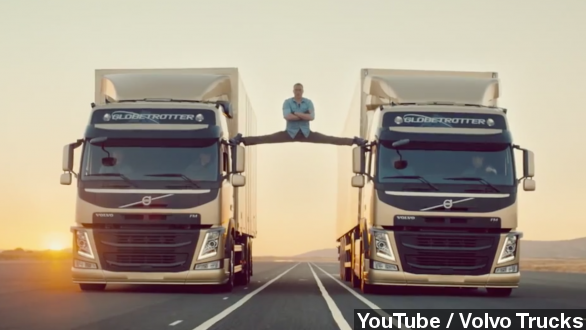 Fifty-three-year-old actor Jean-Claude Van Damme tried out an "epic split" in an ad for Volvo Trucks. The ad has gone viral on YouTube.

He might be 53, but Jean-Claude Van Damme isn't showing his age. In a commercial that's gone viral, he says he's had his ups and downs — but he can still do this.

VAN DAMME: "What you see is a body crafted to perfection." (Via YouTube / Volvo Trucks)

As the camera zooms out, two trucks driving in reverse steer apart from each other, causing "The Muscles from Brussels" to do the splits. Surprisingly, he doesn't lose his balance even a little during the stunt. (Via ABC)

But is this believable? Volvo says the stunt is completely real. One thing that's missing from the ad is some safety equipment, which Volvo says was digitally edited out. (Via NBC)

And if there were any doubts about safety, Examiner reports there apparently weren't any concerns because of the vehicles.

"[The] stunt coordinator ... was adamant that despite how dangerous it looked, the stunt was 100 percent safe thanks to the precision drivers and Volvo Dynamic Steering."

And that's what Volvo says it was trying to point out with its commercial.

At the end of this piece, Volvo explains, "This test was set up to demonstrate the stability and precision of Volvo Dynamic Steering."

The stunt was done in a closed area with two experienced drivers. Van Damme said he decided to do the "epic split" because he thought the concept was "amazing." The video has gained more than 7 million views on YouTube since Wednesday.