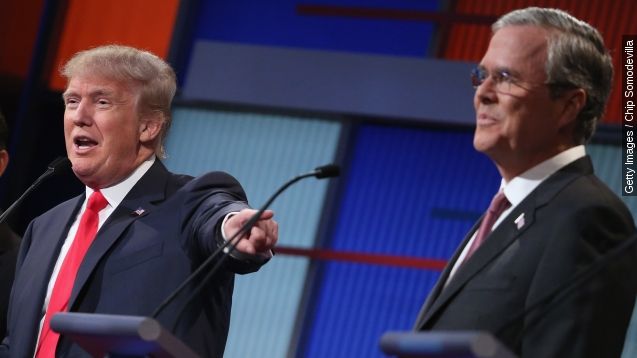 Jeb Bush said he would take on Donald Trump in a two-person debate "any time, any place" during a campaign stop in Florida.

The ongoing war of words between Jeb Bush and Donald Trump has been a continuing subplot in the race for the Republican presidential nomination. But now Bush wants to make it the main event.

On Monday, the former governor of Florida channeled his inner pro-wrestler, saying, “Donald, I’ll take you on one-on-one in a debate, any time, any place. You name it and I’ll do it.”

After months of simmering, the feud between the two could be getting to a boiling point. Trump has consistently mocked Bush.

“Jeb is a weak and ineffective person. … Jeb is an embarrassment to himself and to his family. And the Republican Party has, essentially, they’re not even listening to Jeb,” Trump said. (Video via NBC)

He’s also said Bush is “low energy” and pointed out his comparatively low poll numbers. But Bush has gotten bolder in his attacks on Trump as of late.

“Just one other thing I’ve got to get off my chest: Donald Trump is a jerk,” Bush said in New Hampshire. (Video via CNN)

And during the Dec. 15 debate, he said the business mogul would be a “chaos candidate” and accused him of trying to insult his way to the presidency. (Video via Jeb Bush)

While the thought of a one-on-one debate is intriguing, he’s not the first Republican candidate to propose it.

Ted Cruz challenged President Obama to a similar showdown in November after the president said Republicans were afraid of widows and orphans for opposing Syrian refugees immigrating to the U.S.

More than a month later, it seems unlikely that Obama and Cruz will go at it. And even if Trump declines Bush’s offer, the two will have a chance to spar again at the next Republican debate on Jan. 14 in Charleston, South Carolina.