Jeffrey Lord Is Arguing He Tweeted That Nazi Salute Ironically 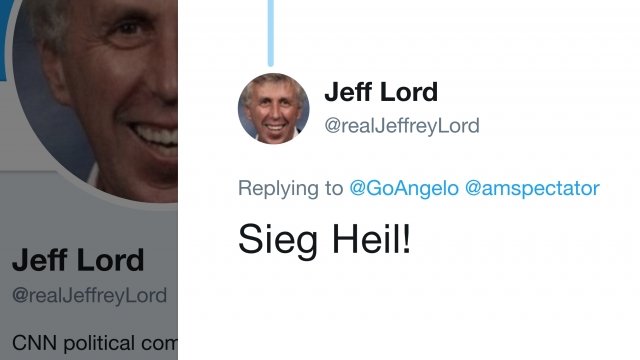 CNN fired commentator Jeffrey Lord for tweeting out a Nazi salute — but the conservative commentator argues the tweet was ironic.

That excuse obviously wasn't enough for CNN. A spokesperson for the company said, "Nazi salutes are indefensible."

But that doesn't stop people on the far-right from using them. Sometimes it's been done seriously by groups like the National Socialist Movement, but others have argued Nazi symbolism was "done in a spirit of irony."

The word "fascism" was used so often during Trump's presidential campaign that it was even named Merriam-Webster's "Word of the Year" for 2015.

Donald Trump And His Supporters Can't Shake The Nazi Comparisons

Laura Ingraham was criticized for seeming to give a Nazi salute after her RNC speech. This isn't the first time Trump's been compared to Hitler.

The word has been used by both liberals and conservatives to describe the other side — especially when activists claim they are being silenced.