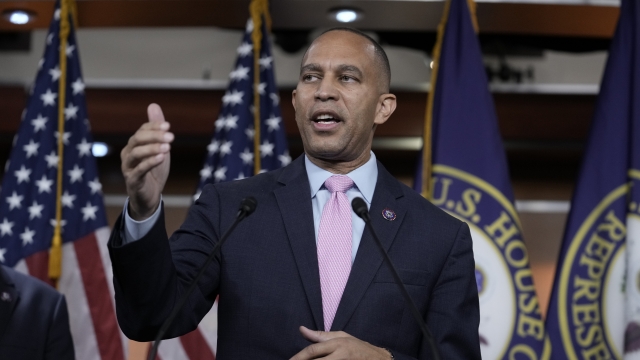 Jeffries, 52, is set to become the new leader of Democrats in the House of Representatives as Speaker Nancy Pelosi steps down.

Jeffries will be the first Black person to hold a top leadership spot and the youngest in leadership when the new Congress begins in January. The Senate's leaders are in their 70s and 80s.

"We've had a great victory in our party for our unity and for our ability to move forward in a united way," outgoing House Majority Leader Rep. Steny Hoyer said.

There's going to be a steep learning curve for Jeffries — who has only served as caucus chair and has little legislation to his name. The Brooklyn native turned corporate lawyer will be playing defense as the minority leader, not only with Republicans planning investigation after investigation into the Biden administration, but also with his own party.

The California Democrat, who rose to become the nation's first woman to wield the speaker's gavel, is a pivotal figure in U.S. politics.

"Republicans in the House will need every vote on their side if they want to pass bills and if they have any trouble gathering the votes on their side, they will need to reach over to the Democratic side of the aisle and make compromises and agreements to move ahead. And so that gives Democrats, even in the minority, some leverage and some power," said Lisa Mascaro, chief Congressional correspondent at The Associated Press.

Despite his support for abortion rights and Medicare for All, Jeffries' pragmatic brand has made him unpopular with many progressives in his caucus. In fact, Jeffries has helped sitting moderate Democrats hold their seats when primaried from the left.

Still, he said Wednesday that he's representing the entire caucus.

"Everybody matters," he said. "Progressives, new Dems, Blue Dogs, whether you're from the North or South, East or West, the Heartland... every body matters."

During the ceremony Jackson followed the custom of every other new justice since 1972.

Jeffries had stayed out of the political fray for the most part throughout his decade in Congress, though he was front and center as an impeachment manager during the former president's second impeachment.

"President Trump abused his power and tried to cover it up... and if you don't know, now you know," he said.

Still, he worked with the Trump administration to pass the First Step Act — a criminal justice reform bill — and says he would continue to work with Republicans.

"We look forward to finding opportunities to work the other side of the aisle and work with them whenever possible, but we will push back against extremism whenever necessary," Jeffries said.

And though his tenure hasn't started yet, Democrats are already looking to the next election.

"Hakeem Jeffries is going to take us to victory in 2024," Hoyer said.