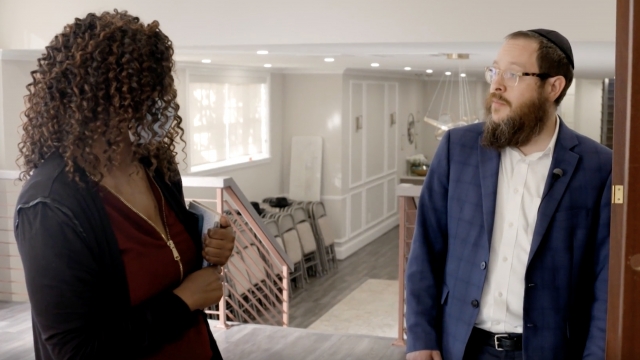 Researchers are seeing an increase in antisemitic incidents at universities across the U.S.

Rabbi Yudi Steiner is the director of the Center for Jewish Life at George Washington University — a school that boasts one of the largest Jewish populations of any in the U.S.

On any given night, Rabbi Steiner hosts about 150 students on campus for dinner and conversations about the Jewish faith.

So it makes sense that when a fraternity was vandalized and a copy of the holy Torah was doused with detergent, Steiner was one of the first calls.

While this particular incident is still under investigation and Steiner urges students not to jump to conclusions, researchers say reports of antisemitism on college campuses are on the rise.

According to data from the American Jewish Committee, 50% of Jews over the age of 18 believe antisemitism has increased on college campuses.

A separate study from the Anti-Defamation League found 43% of Jewish college students say they experienced and/or witnessed antisemitic activity in the last year.

When you think of modern examples of antisemitism, far-right extremists marching through Charlottesville may come to mind. However, according to the ADL, Jewish students report a nearly equal concern of the political left and the political right.

Jeffrey Herbst — who has been the president of secular and non-secular universities — says students should be open to debate.

"I don't think it's appropriate to immediately say, 'You're antisemitic,'" Herbst said. "But you can first say, 'You've got your facts wrong' or 'That's just not correct,' without invoking what is kind of a sledgehammer."

In a recent op-ed, he encouraged fellow university leadership to get ahead of potentially heated debates by inviting a variety of speakers to campus. He also encouraged them to be proactive about potential threats.

"Sometimes colleges overlook antisemitism as an issue in climate because of the perception that it's either not much of a problem, or perception that Jewish students are well ensconced and comfortable," Herbst said.

Steiner says he's doing his part to expose more people to the Jewish culture and pride, leading Jewish students in a march across campus days after the incident.

He's encouraging students to focus on the other side of the statistics, like the hundreds of fellow students who marched in solidarity.