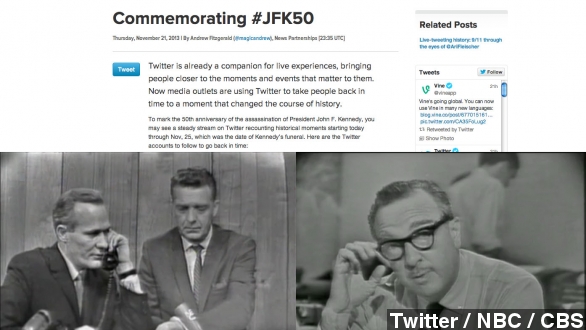 On the 50th anniversary of JFK's death, news outlets used modern tools to re-report the scene and bring 1963 into 2013.

Shortly after it happened, this is what many Americans heard: "Three shots were fired at President Kennedy's motorcade in downtown Dallas."

Chances are, it would be all of those tweets and more. A variety of news outlets made use of modern tools to re-report the scene and bring 1963 into 2013.

Tweets such as this one saying, "President Kennedy is still alive," showed the news as it was being reported in 1963. (Via Twitter / @CBSNews)

The History Channel even linked followers to original radio coverage from KLIF, urging people to listen in as the station covers the unfolding scene.

"It is roped off now as the search for this would-be assassin continues in downtown Dallas." (Via History Channel / KLIF)

NBC live-streamed its original report, including the confusion apparent here.

"Can you tell us anything about the man who was seen with the gun in the window? Has he been placed under arr –"

And CBS also live-streamed its now-iconic coverage on its website.

​Tweets were organized under the the hashtag #JFK50, which is something Twitter promoted.

"Now media outlets are using Twitter to take people back in time to a moment that changed the course of history." (Via Twitter)

But it didn't stop with Twitter. CBS posted two Instagram videos of its original broadcast. That's something the network does with stories today.​ (Via Instagram / CBSNews)

Overall, the coverage Friday was a flurry of activity that was at best educational and at worst insensitive.

CNN's headline spoke of a moment of silence.

But for those of us on Twitter, it was anything but.

As we now know, that online activity isn't all that different from the confusion and coverage five decades ago.