The Democrats' Rising Twin Stars Could Burn Each Other Out 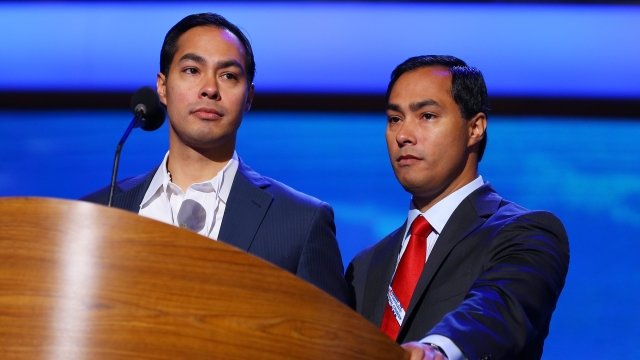 George and Jeb Bush. Princes William and Harry. Beyoncé and Solange. All ambitious or lucky siblings with close relationships, but one has made it harder for the other to move to the next level of their career.

Now you can add twins Joaquín and Julián Castro to that list. If you have no idea who either of those men are, you'd be forgiven, but here's a quick lesson.

Joaquín currently represents the 20th district of Texas in the U.S. House since 2013 and sits on the House Intel Committee. Julián is a bit more famous; he was the mayor of San Antonio, served as President Barack Obama's secretary of housing and urban development and was on Hillary Clinton's list of veep candidates.

The two are notoriously close and are each other's top strategists. And they both have huge political goals, but Julián's seem to be bigger: He has his eyes set on a 2020 presidential run. He's recently launched a PAC and is set to write a campaign-style memoir this fall.

Julián's presidential planning could interfere with his twin's possible run to take on Texas Gov. Greg Abbott next year — a run that's being pushed by Texas Democrats and the Democratic National Committee, especially since Dems currently have no one else viable for the race.

Abbott is popular and has tens of millions in the bank, which makes any chance of unseating him pretty tough. But local Dems seem to think Joaquín can tap into the rising Latino population in Texas and make Abbott vulnerable.

Inside Trump's (Current) Beef With The GOP

We're not used to seeing presidents fight publicly with members of their own party.

The concern is two-fold. If Joaquín loses, it could paint both brothers as losers, but if he wins, it might take too much of the spotlight off of Julián and make his run for the White House that much more difficult.

It's not even clear if Joaquín actually wants to run for governor. He has a safe seat and is rising through the House ranks but so far seems to be hedging. He's been quoted as saying: "It's my intention to run for re-election. If that changes, I'll let you know."