Jobless Benefits End Saturday: What You Need To Know 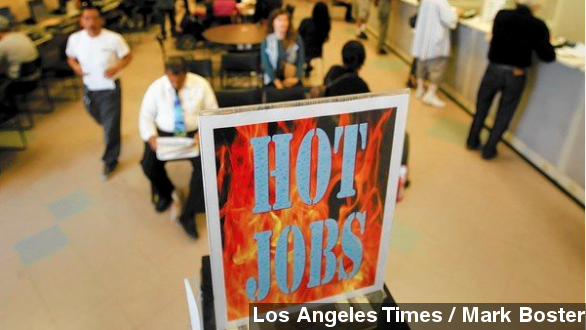 More than 1 million Americans will lose their unemployment benefits when a federal aid program expires Saturday.

More than 1 million out-of-work Americans are set to lose their unemployment benefits Saturday when an emergency federal aid program will come to an end.

The Emergency Unemployment Compensation program was created during the 2008 recession to supplement states' benefits for the long-term unemployed. (Via WCNC)

The program extends on average about $300 a week to the unemployed after they exhaust their state-provided benefits, but it will come to an abrupt end on Saturday.

The program is set to run out of funding after Congress failed to renew it in the recently passed bipartisan federal budget agreement, despite a strong push by House Minority Leader Nancy Pelosi. (Via Al Jazeera)

It's expected to leave an estimated 1.3 million long-term unemployed without any state unemployment benefits.

Typically, states provide insurance payments to the jobless for 26 weeks, or about six months. But under the Emergency Unemployment Compensation program, some could receive benefits for more than 90 weeks. (Via KTTV)

According to the Center on Budget and Policy Priorities, most states currently offer benefits for 63 weeks. That is reflected in this map where the darker orange colors signify longer allowances for unemployment benefits. Notice North Carolina is the only state colored blue.

But come Saturday, this is what that map will look like. The darker blue indicates states that will stop benefits at the 26-week mark, while states in light blue will cut off benefits somewhere under 26 weeks. (Via Center on Budget and Policy Priorities)

That means anyone who is currently on unemployment benefits past the 26-week mark will be cut off Saturday.

USA Today explains: "The cutoff will initially affect 1.3 million people, but 1.9 million more will lose benefits by mid-2014 when their 26 weeks of state paychecks run out."

Many Republicans point out that by not renewing the program, the government is saving more than $25 billion.

And according to The Washington Post, some GOP members say restoring the normal 26-week cutoff will provide an incentive for unemployed Americans to take jobs now as opposed to maybe holding out for a better one down the road.

However, Democrats and some economic analysts disagree. A CNBC anchor explains cutting the program might lower the jobless rate, but not necessarily in a good way.

"If you look at North Carolina, for example, they ran out of unemployment benefits, and people dropped out of the labor force instead of taking that next worst job. Not the kind of improvement you want to see."

And according to the Economic Policy Institute, job openings are becoming harder to come by.

The Unemployment Compensation Program had been renewed 11 times until now, and Democrats say it will be a top policy priority starting in 2014. Congress will return to session Jan. 7.