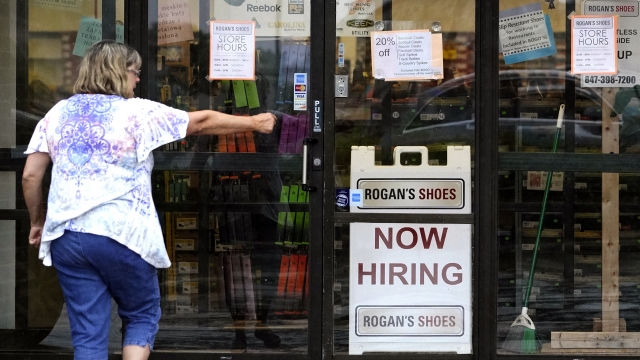 For now, the economy is showing sustained strength.

The number of Americans collecting unemployment benefits slid last week, another sign that the job market continues to recover rapidly from the coronavirus recession.

The weekly applications have fallen more or less steadily this year — from a peak of 904,000 in early to January. But they remain high by historic standards: Before COVID struck the United States in March 2020, claims were coming in at about 220,000 a week.

The job market and overall economy have been recovering from the collapse of the spring of 2020. The rollout of vaccines this year has encouraged businesses to reopen or expand their hours and sent cooped-up consumers back out to visit restaurants, bars and shops.

Still the health crisis isn't over. COVID-19 cases are ticking up as the highly contagious delta variant spreads among the unvaccinated. The United States is reporting an average of more than 50,000 new cases a day, up from fewer than 12,000 a day in late June. The increase in cases could have economic consequences if governments decide to restrict business activity again or if consumers choose to stay at home as a precaution.

For now, though, the economy is so strong that many businesses say they can't find workers. Employers posted a record 9.2 million job openings in May, advertising vacancies faster than applicants can fill them.

Fueled by vaccinations and government aid, the U.S. economy grew at a solid 6.5% annual rate last quarter in another sign that the nation has achieved a sustained recovery from the pandemic recession.

Thursday’s report from the Commerce Department estimated that the nation’s gross domestic product — its total output of goods and services — accelerated in the April-June quarter from an already robust 6.3% annual growth rate in the first quarter of the year. The quarterly figure was less than analysts had expected, but the economy was likely held back mainly by supply shortages in goods, components and labor.

For all of 2021, the economy is expected to expand about 7%. That would be the strongest calendar-year growth since 1984. And it would mark a sharp reversal from last year’s 3.5% economic contraction — the worst in 74 years — as a result of the pandemic.