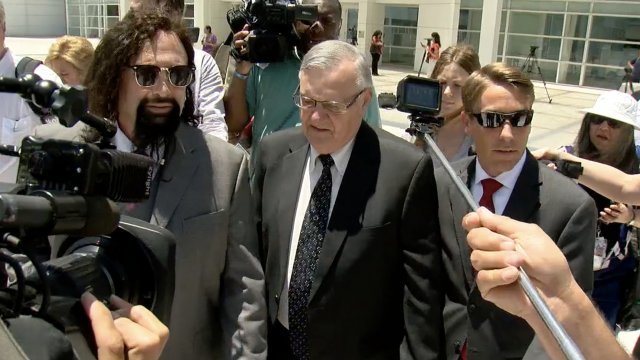 The former Arizona sheriff is petitioning the court to throw out his conviction.

President Donald Trump may have pardoned Joe Arpaio, but that doesn't mean the former Arizona sheriff's legal troubles are over.

Arpaio was convicted of criminal contempt after his department ignored a court order to stop what a judge ruled to be racial profiling.

Now he's fighting to get his conviction thrown out altogether. The move would, legally speaking, make it as if his case had never existed.

The former sheriff argues his conviction should be expunged because he was pardoned before he had a chance to request a retrial or appeal the conviction.

Lawmakers And Others React To Trump's Pardon Of Joe Arpaio

The request, like the pardon itself, is somewhat unusual. The judge presiding over the case doesn't have to vacate the verdict from Arpaio's record because of the pardon, they only have to stop going forward with the case.

On the other hand, a group formed by former White House attorneys, called "The Protect Democracy Project," wants the Department of Justice to throw out the pardon altogether. It wrote the pardon violates the Constitution by undercutting due process.

The group argues the constitutional right to due process is diminished if officials aren't held accountable for their actions "because for due process and judicial review to function, courts must be able to restrain government officials."