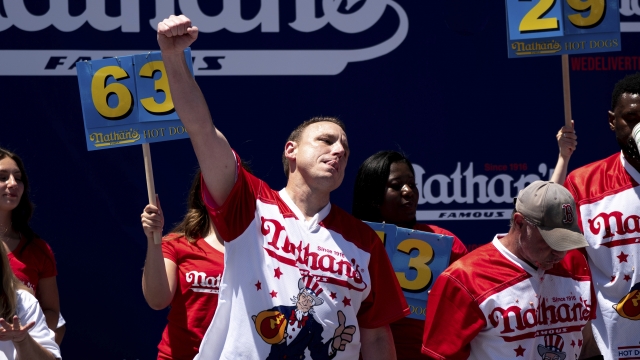 Frankfurter-munching phenom Joey "Jaws" Chestnut put a protester in a chokehold while gobbling his way to a 15th win Monday at the Nathan's Famous Fourth of July hot dog eating contest, powering down 63 hot dogs and buns at the annual exhibition of excess. 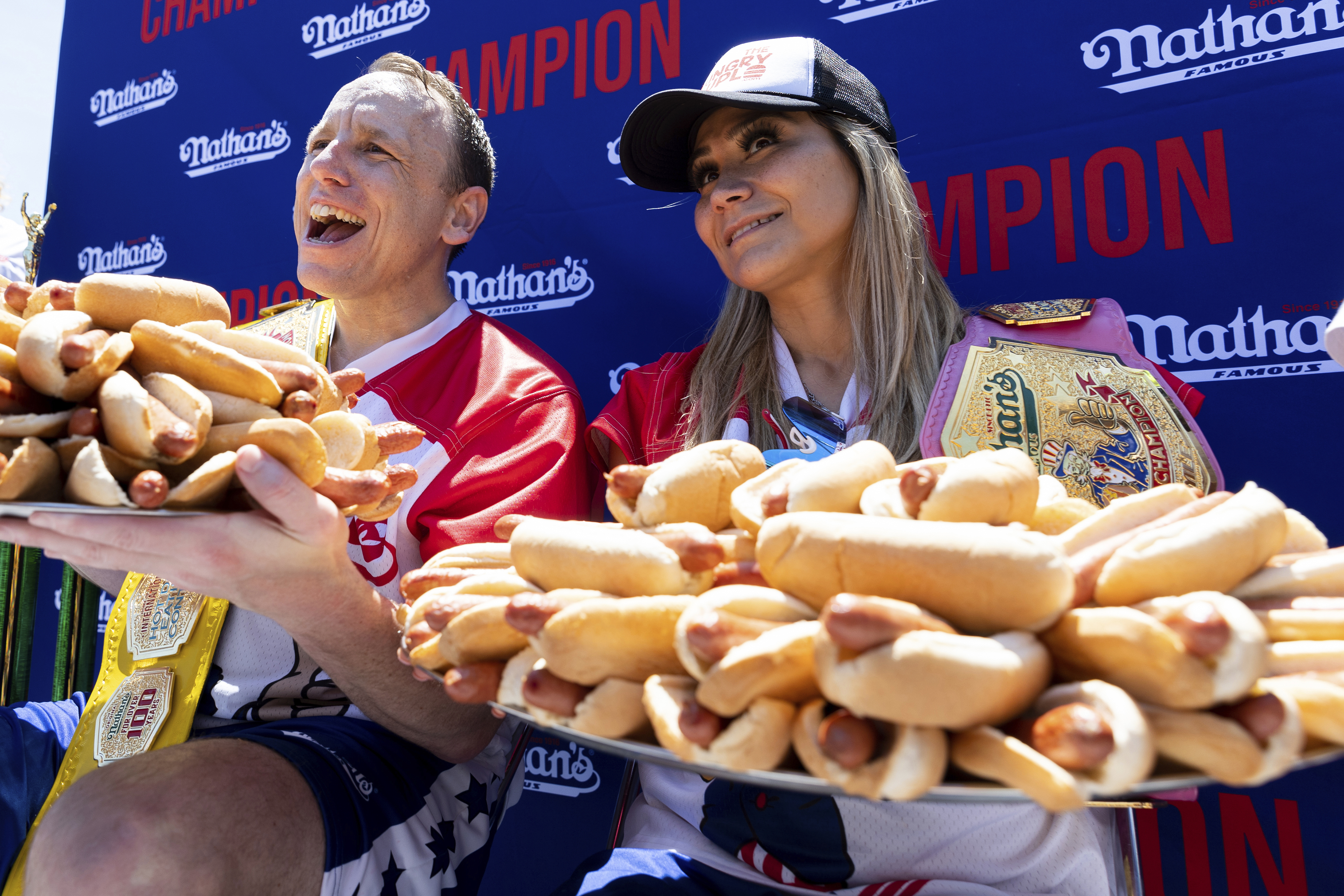 In a decisive chowdown comeback, women's record-holder Miki Sudo downed 40 wieners and buns to win the women's title after skipping last year's frank fest because she was pregnant.

A spectator wearing a Darth Vader mask rushed the stage, momentarily disrupting the competition. Chestnut put the protester in a brief chokehold before contest officials hurried over and escorted the intruder away.

After the altercation, Chestnut went back to the task at hand: Devouring more hot dogs. 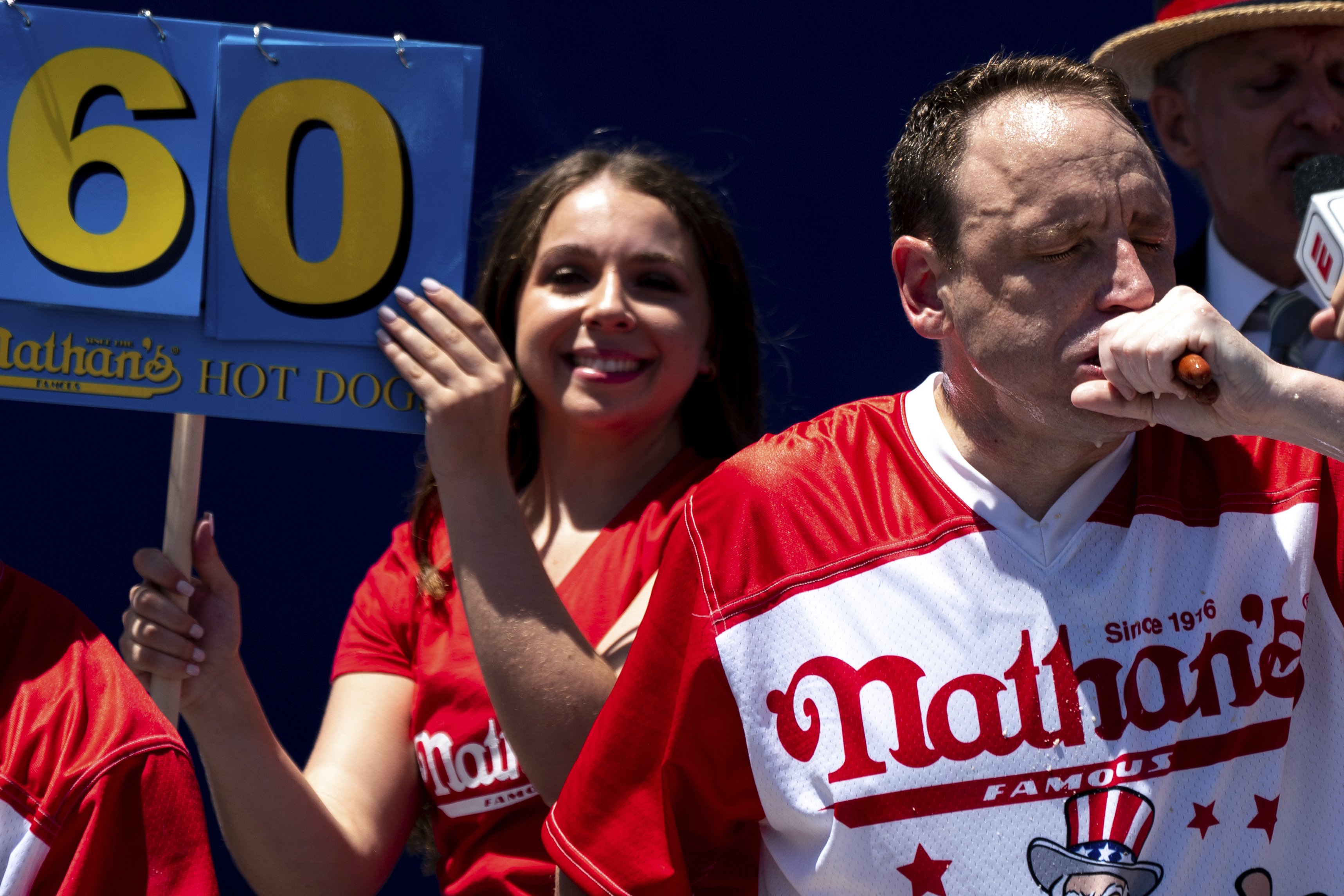 Monday marked the contest's return to its traditional location outside Nathan's flagship shop in Brooklyn's Coney Island neighborhood. The event was relocated in 2020 and last year because of the coronavirus pandemic.

"It's beautiful to be back here" in front of a throng of spectators, Chestnut told ESPN after his feat, which the 38-year-old managed while wearing a surgical boot because of a leg injury.

"It hurts, but I was in the zone for a little bit. I was ignoring it," said Chestnut, but the pain eventually slowed his pace in the 10-minute competition.

Last year, the Westfield, Indiana, resident topped his own record by consuming 76 franks and buns.

Sudo, of Tampa, Florida, set the women's record at 48 1/2 weiners and buns in 2020, before taking last year off while expecting. She and Nick Wehry — a fellow competitive eater whom she met through the Nathan's contest in 2018 — welcomed son Max on July 8, 2021.

From dad's arms, the baby watched his 36-year-old mother notch her eighth Nathan's win. She told ESPN afterward that she hoped he would someday take a message away from it.

"I want to set an example," she said, "to do things that you love and push yourself to your absolute limits and, when things get difficult, to still give it a try. And, you know, you might actually just come out victorious."

Sudo then took over parenting duties while Wehry tried for the men's title.

In conjunction with the spectacle, Nathan's donates 100,000 franks to the Food Bank for New York City.