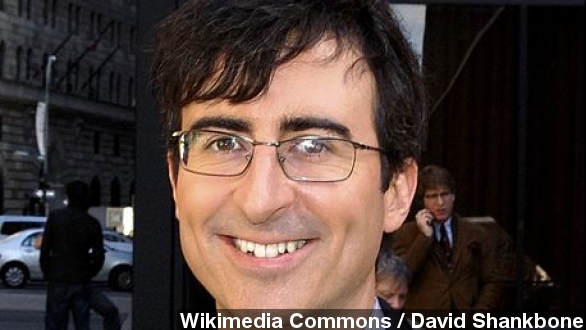 The former 'Daily Show' writer/correspondent/fill-in host plans to helm a comedy talk show on HBO in 2014.

British funnyman John Oliver announced he's amicably seceding from his union with John Stewart and "The Daily Show" for his own comedy series on HBO.

The new show, which doesn't yet have a title, will be a topical comedy talk show. HBO describes the new series as a "satirical look at the week in news, politics and current events." Sound familiar? (Via CBS / "Late Show with David Letterman")

HBO's president of programming Michael Lombardo said in a statement, "We weren't otherwise searching for another weekly talk show, but when we saw John Oliver handling host duties on 'The Daily Show,' we knew that his singular perspective and distinct voice belonged on HBO." (Via Variety)

The 36-year-old Oliver has been a writer and correspondent on "The Daily Show" since 2006. He won praise from critics more recently for his summer-long stint as "Daily Show" host while Stewart was away filming a movie. (Via Comedy Central / "The Daily Show")

While some pegged Oliver as Stewart's successor, his summer hosting duties were more or less an open audition for HBO and at least one other channel looking to capitalize on his comedy chops.

Along with the big announcement, Oliver also extended his gratitude to the network and his old colleague. "I want to thank Comedy Central, and everyone at 'The Daily Show' for the best seven and a half years of my life. But most of all, I'd like to thank Jon Stewart. He taught me everything I know. In fact, if I fail in the future, it's entirely his fault." (Via E!)

The new series will reportedly debut on Sundays nights in 2014.