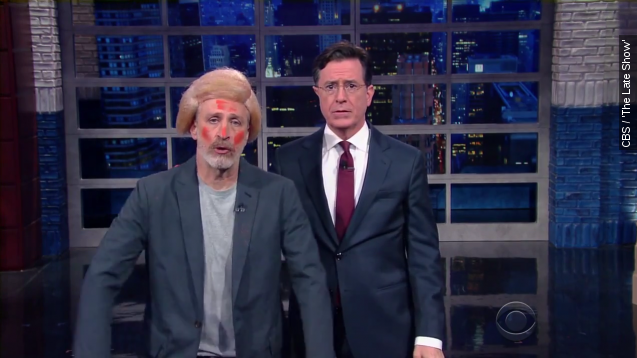 Jon Stewart is doing everything he can to draw attention to the Zadroga Act, even rubbing Cheetos dust on his face and pretending to be Donald Trump.

If you've been missing former "Daily Show" host Jon Stewart, you're in luck.

Stewart stopped by "The Late Show" this week to visit pal Stephen Colbert and show some support for the Zadroga Act.

"That thing is a slam dunk right? Everybody wants that," Colbert said.

"If I may, everybody human," Stewart said.

The Zardroga Act provides health benefits to 9/11 first responders. Stewart has been a supporter for the legislation since before it was passed in 2010, but it expired in October. (Video via CBS)

Stewart's doing everything he can to draw attention to the issue, even doing the only sure-fire thing to catch the media's attention — actually becoming Donald Trump.

"Pass the Zadroga Act or I will glue Congress together, dip them in gold and wear them around my freaking neck," Stewart said.

If Congress does not vote to fund the Zadroga Act, officials say it will run into problems by February and have to shut down by the summer.