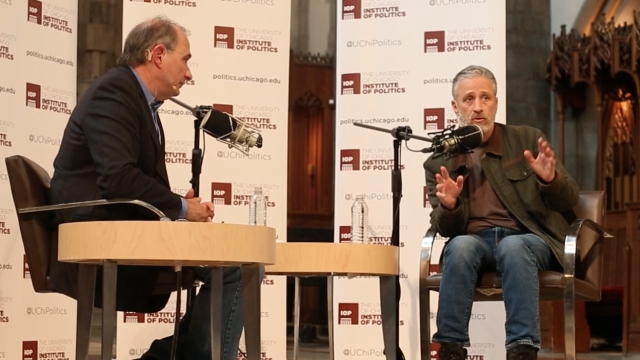 Jon Stewart stopped by the University of Chicago to discuss the presidential race, and it seems he's not a huge fan of either party's front-runner.

"Are you eligible to run if you are a man-baby? Uhh, a baby-man?" Jon Stewart said about Donald Trump while speaking at the University of Chicago.

During a live taping of David Axelrod's podcast, Jon Stewart gave his take on the presumptive GOP nominee.

"He makes sense if you view it through the prism of talk radio. ... We are falling. There are rapists and murderers at the border coming to kill you. If that's what you've been fed, and that's what you're buying into, Donald Trump makes more sense than anybody else out there," Stewart said of the GOP front-runner.

The whole idea of political correctness is everybody's so sensitive. Just get over it. Why should African-Americans be so sensitive about police shootings? Donald Trump couldn't handle us making a joke about him. Graydon Carter did a joke about Donald Trump's hands 25 years ago. He's still not f***ing over it," Stewart said during "The Axe Files" podcast live taping.

Stewart says he's not impressed with Hillary Clinton's campaign either.

"What I think about Hillary Clinton is I imagine to be a very bright woman without the courage of her convictions, because I'm not even sure what they are. And maybe I'm wrong, maybe a real person doesn't exist underneath there. I don't know." Stewart said of the Democratic front-runner.

"That is not to say that she is not preferable to Donald Trump. Because at this point, I would vote for Mr. T over Donald Trump," Stewart said.