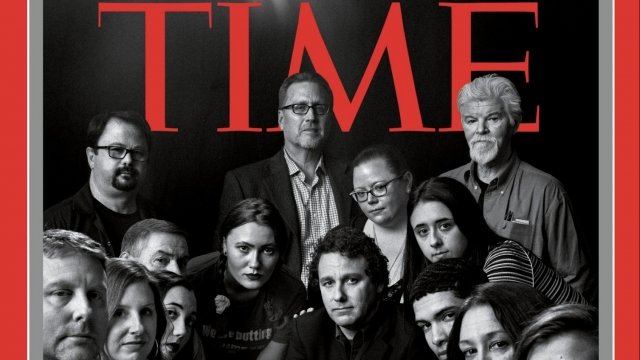 The magazine honored a group of journalists who have all taken "great risks in pursuit of greater truths."

That's Maria Ressa, the founder of a Philippine news site that's well known for its critical reporting on the country's government. She's also one member of the press Time magazine is honoring as its 2018 Person of the Year.

Calling the group "The Guardians," Time's also recognizing Jamal Khashoggi, the Washington Post columnist who was killed at the Saudi consulate in Istanbul in October. Khashoggi was a known critic of Saudi Crown Prince Mohammed bin Salman. Time's editor-in-chief told NBC's "Today" show Tuesday that it's the first year the publication has selected someone who is no longer alive.

Time's also honoring the staff of Maryland's Capital Gazette newspaper. Five of its staff members were killed earlier this year after after a gunman opened fire inside the newsroom.

And the last two 2018 Person of the Year recipients are Reuters journalists investigating allegations of killings of Rohingya Muslims by Myanmar's government who were sentenced to seven years in prison.

Because of this, their wives are featured on one of the covers, each holding a photo of their husband.

Time has given out what is now known as its Person of the Year Award since 1927, when the magazine honored aviator Charles Lindbergh. Last year's winner was a group Time called "The Silence Breakers" — referring to those who'd broken their silence on sexual harassment and assault.