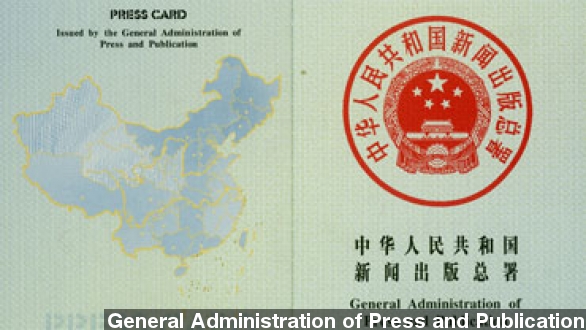 Foreign journalists say China denies visas as a form retaliation, and domestic journalists have been warned to publish from "correct" points of view.

General Administration of Press and Publication

For foreign Journalists working in China, December is a stressful time as they wait to see whether their press visas will be granted for another year or if they'll be forced to leave. And lately the stress has been compounded by the fear those visas could be deliberately withheld as a form of retaliation.

Earlier this month, The New York Times warned China was keeping its reporters, along with reporters for Bloomberg, in what's come to be known as "visa purgatory" — threatening the possibility of expulsion from the country at the end of the year. (Via The Telegraph)

"You know, there's this impression among journalists there that that's a pressure tactic, right, that if their coverage isn't to the pleasing of the government that they may not get their visa." (Via CNN)

China did eventually grant press passes to most of those journalists, allowing them to pursue visas, though it's still not a guarantee they can stay in the country. (Via The Washington Post)

The row highlights growing complaints about press freedom in China. And as you can imagine, the country's own journalists have it even worse.

The New York Times published this actual test Chinese journalists will have to take in 2014, quizzing them on the principles of Chinese socialism. One of the questions was:

"How can news and media workers improve their ability of leading public opinion?

a. Insist on principles of the party.

b. Insist on being people-oriented.

c. Keep on innovating and reforming.

Turns out all four carefully-worded answers are acceptable.

On Monday, China's Communist Party told journalists they should refrain from publishing incorrect points of view, and that reporting should reflect socialist values — a suggestion that should probably be taken seriously, given China's status as one of the world's top countries for imprisoning journalists.

"Criticizing the government, criticizing the Communist Party ... uncovering corruption or bad government — those are the kinds of stories that many Chinese officials don't want published." (Via PBS)

China already blocks many major Western media sites, including Bloomberg and The New York Times, which were blocked after the papers published unflattering stories about top officials.