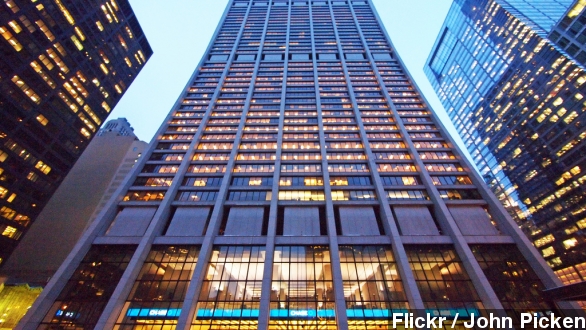 JPMorgan Chase settled with the U.S. Department of Justice for $13 billion, the largest payout by one corporation to the U.S. government ever.

After months of negotiations, America's largest bank is paying up for its role in the 2008 financial crisis. JPMorgan Chase has agreed to pay the federal government $13 billion.

In doing so, it admits to purposefully selling faulty mortgage securities to investors that were destined to fail, leaving investors with billions of dollars in losses and helping to send the country into a financial recession. (Via WCAU)

The settlement between the Justice Department and JPMorgan is the largest payout by one corporation to the federal government in history and almost three times the size of the next largest, which came out of the BP oil spill. (Via CNN)

The settlement has been broken down into several different parts. Nine billion will be paid to settle federal and state civil claims which inculde payments to the Federal Housing Agency, National Credit Union Administration and various state governemnts. The remaining $4 billion will be used for consumer relief. (Via Flickr / John Picken)

But this latest historic settlement just rounds out an expensive year for JPMorgan who, since January, has agreed to more than $20 billion in settlements. (Via NPR)

With such a large settlement, the Justice Department is beating on its chest a little claiming more cases and settlements are soon to come.

Attorney General Eric Holder said in a statement, "The size and scope of this resolution should send a clear signal that the Justice Department’s financial fraud investigations are far from over. ... No firm, no matter how profitable, is above the law, and the passage of time is no shield from accountability." (Via The United States Department of Justice)

Which begs the question, who at JPMorgan Chase will shoulder the blame for the company's improper banking? The folks at CNBC say settlements like this could just be the start.

"It is interesting to note that this criminal investigation into the mortgage back securities is ongoing. ... There's still a significant amount of legal over hang here."

JPMorgan released this statement in response to the settlement, "We are pleased to have concluded this extensive agreement ... Today's settlement covers a very significant portion of legacy mortgage-backed securities-related issues for JPMorgan Chase"

The multi-trillion dollar bank was sure to add that it is "fully reserved for this settlement" it also held a conference call with its investors promptly follwing news of the settlement.