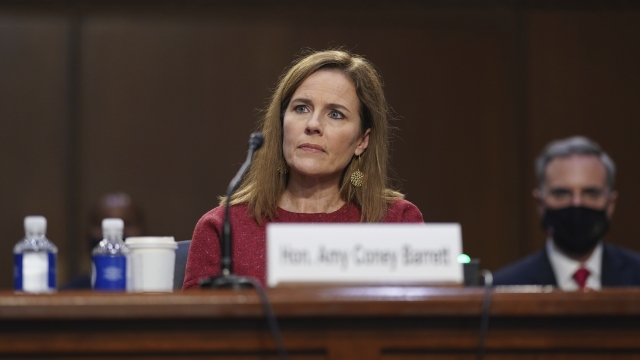 The Supreme Court nominee said Tuesday during a second day of hearings, "I have made no commitment to anyone... about how I would decide any case."

A marathon day of questioning for Judge Amy Coney Barrett.

The Seventh Circuit judge was pressed for hours... repeatedly on her judicial philosophy and how she would handle cases, specifically on social issues, despite being a self-proclaimed conservative Catholic.

"I can't take policy positions or express my personal views before the committee," Barrett said. "My personal views don't have anything to do with how I would decide cases and I don't want anyone to be unclear about that."

Democrats honed in on how Barrett would handle a potential challenge to the landmark abortion case Roe vs. Wade, same sex marriage and an upcoming case challenging portions of the Affordable Care Act. She would not answer how she would rule in any of those cases.

"Let me be clear, I have made no commitment to anyone — not in this Senate, not over at the White House  — about how I would decide any case," Barrett said.

Barrett, as once Professor Barrett, signed on to an ad opposing abortion and spoke at multiple anti-abortion rights events. Democrats stayed away from questioning the role of her religion in opinions outright, but instead voiced concern over the future of those decisions.

"The president has said that reversing Roe v. Wade will happen automatically because he's putting pro-life justices on the court," Democratic Sen. Sheldon Whitehouse said. "Why would we not take him at his word? The Republican Party platform says it will reverse Roe."

Barrett was asked about her respect for honoring precedent, or stare decisis, on these issues. She instead focused on "super precedent" when multiple decisions are made about a single issue and reaffirming it. She did not commit to never overturning cases.

"If you overrule a precedent of the court even if you think it was wrongly decided there's a list of things you have to look at before you actually overrule the case, is that a fair way of saying it?," Senate Judiciary Committee Chairman Lindsey Graham asked Barrett.

"It's a fair way of saying it," Barrett replied.

"Would you apply those factors if you ever found yourself in a position where you wanted to consider overruling a precedent?," Graham added.

Barrett put some daylight between herself and the late Justice Antonin Scalia Tuesday after previously saying their views were one in the same.

Still, the politics of her confirmation on full display three weeks until Election Day. Her nomination — at the moment cruising to confirmation… likely by the end of the month.