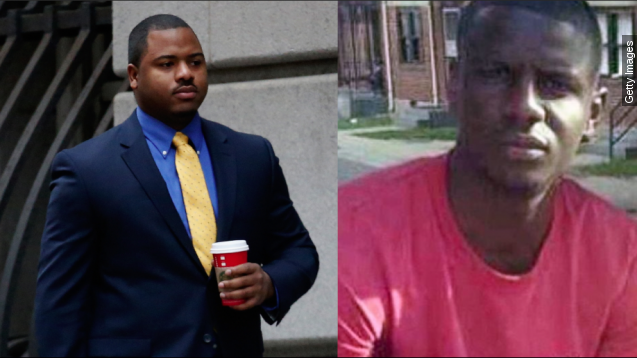 William Porter is one of six officers charged in the April death of 25-year-old Freddie Gray. Caesar Goodson is scheduled to be tried next.

The judge in the trial of officer William Porter, the first of six officers charged in the death of Freddie Gray, has declared a mistrial. The jury is reportedly hung on all charges.

Freddie Gray died in April, a week after injuring his spine while riding in the back of a police van. Gray's death was ruled a homicide by Maryland's chief medical examiner who says, while Gray was transported, "safety equipment was available but not used."

The ruling comes just a day after the jury announced it was deadlocked. Judge Barry Williams, who is supposed to preside over all six of the officers' trials, sent them back to deliberate.

In preparation for the verdict, Baltimore police have begun preparations for potential unrest in the community. Pictures of armored vehicles and riot gear began to circulate online Tuesday.

The Baltimore Police Department spokesman told the Baltimore Sun: "These assisting agencies and that equipment is only used if absolutely necessary. It's not part of normal police response to things."

Next on trial is officer Caesar Goodson, who faces the most serious charge of second-degree depraved-heart murder, along with manslaughter and assault charges. The depraved-heart charge alleges the defendant knew the act in question was dangerous and didn't care. It carries a maximum sentence of 30 years.