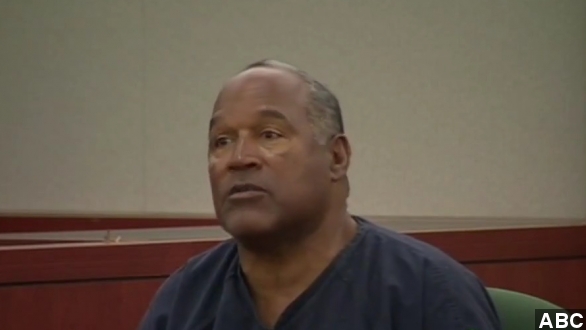 A judge denied O.J. Simpson's request for a new trial on his 2008 convictions for robbery and kidnapping in Las Vegas.

The decision is in, and O.J. Simpson is staying behind bars, for now.

A judge denied the former football star's bid for a new trial on his 2008 convictions for robbery and kidnapping in Las Vegas. He's currently serving a 33-year prison sentence. (Via WTVT)

According to CNN, 66-year-old Simpson had asked for a new trial on 22 grounds related to his trial and appeal, including incompetent legal counsel.

But that wasn't enough to sway the judge, who wrote, "Given the overwhelming amount of evidence, neither the errors in this case, nor the errors collectively, cause this court to question the validity of Mr. Simpson's conviction." (Via Las Vegas Sun)

Simpson was convicted in 2008 after he and several friends broke into a Las Vegas hotel room in 2007, demanding the return of sports memorabilia Simpson claimed was his. (Via KLAS)

The defense argued that he was just trying to get his stuff back, and that he didn't know the five men who accompanied him to the hotel were armed. But he was found guilty and convicted of robbery at gunpoint and kidnapping two sports memorabilia dealers.

Simpson's current legal team hoped to get him a second chance in court. His lawyers claimed his attorney in the first trial didn't do his job correctly, which they say ultimately led to the conviction. (Via ABC)

This comes just a few months after Simpson was granted parole on five concurrent sentences — but the ruling didn't free him because he faces at least four more years behind bars for other convictions in the case. (Via USA Today)

Of course, this particular trial wasn't nearly as sensational as the case he's now infamous for.

Back in 1994, Simpson was accused of the murders of his former wife, Nicole Brown Simpson, and her friend Ronald Goldman. And after a long, dramatic, high-profile trial, he was acquitted. (Via History Channel)

Since then, Simpson lost a civil trial brought against him in the deaths and was ordered to pay millions in damages to the Brown and Goldman families. As for Simpson's current legal trouble, his lawyers say they are disappointed in the judge's ruling and are quote "convinced the law provides relief for Mr. Simpson."