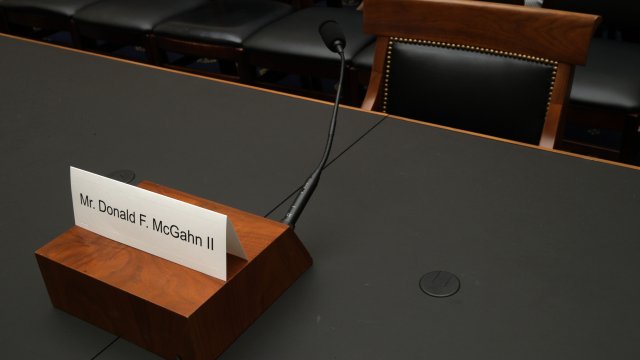 A judge ruled Monday night that not all White House officials are immune from being compelled to testify.

In her 120-page ruling, Judge Ketanji Brown Jackson says the Department of Justice's "claim to unreviewable absolute testimonial immunity on separation-of powers-grounds — essentially, the the Constitution's scheme countenances unassailable Executive branch authority — is baseless, and as such, cannot be sustained."

The judge's ruling in McGahn's case is nearly six months in the making. House Democrats sued McGahn in August in connection with the Mueller probe. McGahn didn't show up to a scheduled hearing in May.

The decision comes as other former top White House officials including former national security adviser John Bolton and former national security aide Charles Kupperman have also asked a judge to decide if they must comply with  congressional subpoenas in the ongoing impeachment inquiry. Both ignored closed door depositions, but Bolton has been named throughout testimony.

A number of current and former officials have defied White House orders not to appear and testified anyway, while some of the people closest to the president, including Bolton, acting Chief of Staff Mick Mulvaney and Secretary of State Mike Pompeo, have ignored all requests from Democrats. This ruling could make them more likely to have to comply.

McGahn's name showed up throughout the special counsel's final report more than 500 times, including an account where he says the president told him to fire Robert Mueller.

Though the suit was filed before the latest revelations about the president's phone call with Ukrainian President Volodymyr Zelenskyy, House Democrats may want to question McGahn about other issues. They believe McGahn can testify about potential acts of obstruction of justice. Democrats haven't said whether a potential article of impeachment could include actions outside the scope of the Ukraine issue. They could include findings from the Mueller report, too.

Previous White Houses have engaged in similar battles. The courts ruled against the Bush administration in 2008 after it argued former White House counsel Harriet Miers was immune from subpoenas. Judge Brown Jackson referred to this decision in the conclusion of her arguments. The ruling will likely be appealed.