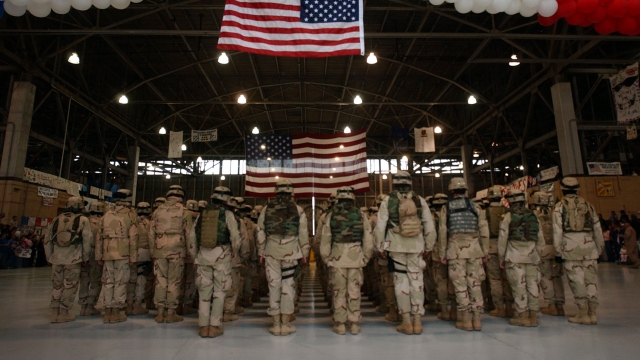 An injunction temporarily blocking the military's transgender ban is at the center of a legal dispute.

The Department of Defense says its new rules barring most transgender people from serving in the military can take effect next month. But a federal judge says that's "incorrect" because her injunction temporarily blocking the rule is still in place while it goes through the appeals process.

This is a little complex, so stick with us. In August 2017, President Donald Trump announced a ban on transgender people serving "in any capacity in the U.S. Military." Several lawsuits were filed to block that ban, and multiple federal judges granted injunctions, including Judge Colleen Kollar-Kotelly — who is a U.S. District Judge for the District of Columbia.

Courts have since lifted three of the four injunctions while legal challenges are working their way through the justice system.

But the status of Kollar-Kotelly's injunction is at the center of a legal dispute. In January, the D.C. Court of Appeals reversed the lower court's injunction that prevented the ban from going into effect. The Justice Department says that decision is good enough and that there aren't any more obstacles keeping the Pentagon from implementing the policy. Opponents of the rule say the injunction should stand, since the D.C. Court of Appeals hasn't issued an official mandate to have it lifted.

Last week, the Pentagon approved an amended version of Trump's transgender policy and issued a memo to implement the rule. That memo says it's set to go into effect April 12. After that date, most individuals who require hormone treatments or transition surgery won't be allowed to serve.

Military service secretaries can grant waivers on a case-by-case basis. And transgender people currently serving can continue to do so if they agree to serve in the gender assigned to them at birth.

On Tuesday, Kollar-Kotelly issued a notice clarifying that her injunction is still technically in place. She said the "defendants were incorrect in claiming that there was no longer an impediment to the military’s implementation" of the policy.

It isn't clear if the judge's notice will affect the Pentagon's timetable for implementing the new policy.

A Pentagon spokeswoman told news outlets that the department is discussing next steps with the Justice Department.