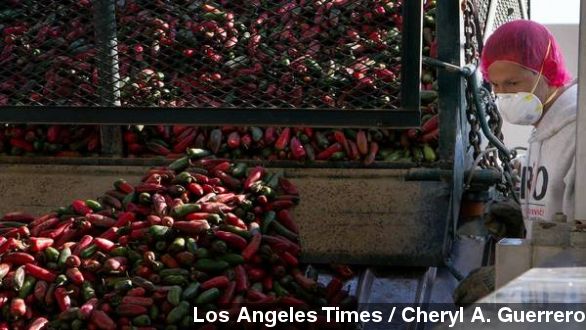 A judge in southern California has ordered popular hot sauce maker Sriracha to stop any operations that are releasing strong orders into the city.

Good news, Irwindale, Calif. residents. You can all breathe a little easier — literally.

A judge in southern California has ordered a factory that manufactures the popular hot sauce Sriracha to stop any operations that are releasing strong orders into the city. (Via CNN)

This, after neighbors complained smells coming from the factory producing the condiment caused headaches, sore throats and even nosebleeds. (Via YouTube / FoodBeastTV)

"We had a bridal shower and had guests go inside. We’re all choking … it was right in the throat." (Via CBS)

Health inspectors found the plant was emitting strong odors, and in turn the city filed a lawsuit ordering the plant to halt its production.

According to KNBC, the judge in the case acknowledged there was a “lack of credible evidence” linking some of those problems to the odor, but said it appears to be "extremely annoying, irritating and offensive to the senses warranting consideration as a public nuisance."

Now, Sriracha lovers, it’s unclear if you need to start stocking on up the condiment.

​As the Los Angeles Times reports, the injunction doesn’t define specifically which operations must cease.

And the maker of the sauce, Huy Fong Foods, hasn’t commented on how the ruling could affect production. Though its CEO did warn any sort of shutdown could cause prices to go up. (Via The Huffington Post)