Federal Judge Speaks Out For First Time About Family Tragedy 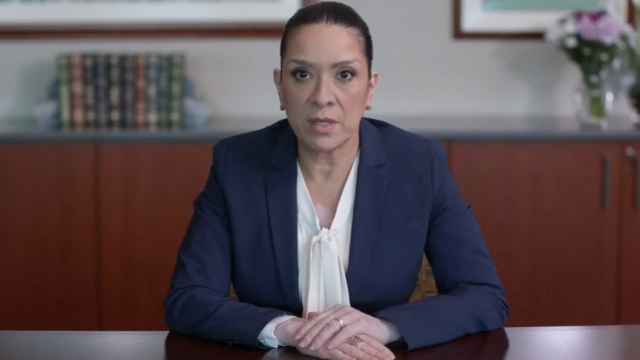 Judge Esther Salas wants more protection and privacy for judges after a gunman killed her son and injured her husband at their New Jersey home.

“Two weeks ago my life as I knew it changed in an instant and my family will never be the same. ... We are living every parent’s worst nightmare — making preparations to bury our only child, Daniel."

Federal Judge Esther Salas is speaking out for the first time, nearly two weeks after a gunman killed her 20-year-old son and injured her husband at their home in New Jersey. In an emotional video released Monday, Salas described the last moments she had with her son Daniel.

"Daniel and I went downstairs to the basement and we were chatting, as we always do, and Daniel said, 'Mom let's keep talking.' I love talking to you mom,'" said Salas. "And it was at that exact moment that the doorbell rang. And Daniel looked at me and said, 'Who is that?' And before I could say a word, he sprinted upstairs. Within seconds I heard the sound of bullets and someone screaming 'no.' I later learned that this monster who had a Fedex package in his hand opened fire, but Daniel being Daniel protected his father and he took the shooter's first bullet directly to the chest. The monster then turned his attention to my husband and began to shoot at my husband. One shot after another. Mark was shot three times. One bullet entered his right chest, the other his left abdomen and the last one in the right forearm."

Judge Salas’s husband is still in the hospital. She says she made the video to press for more protection and privacy for federal judges.

"We know that our job requires us to make tough calls," Salas said. "And sometimes those calls can leave people angry and upset. That comes with the territory and we accept that. But what we cannot accept is when we are forced to live in fear for our lives because personal information like our home addresses can easily be obtained by anyone seeking to do us or our families harm."

"In my case, the monster knew where I lived and what church we attended and had a complete dossier on me and my family. At the moment there is nothing we can do to stop it and that is unacceptable."

The U.S. Marshals Service is responsible for protecting federal judges and they say they respond to an average of about 1,350 threats or inappropriate comments each year.

Officials have said the shooter who attacked Judge Salas’s family, a men’s rights attorney, took his own life.