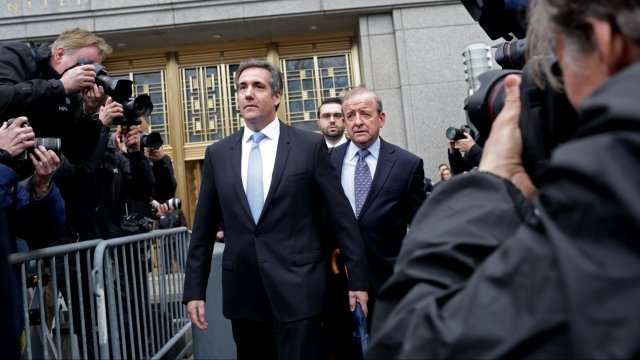 Teams representing Michael Cohen, the Trump Organization and President Trump all want to review the materials to determine what is privileged.

It turns out a lot of people might review the documents swept up in the Michael Cohen raids, including the president himself.

A quick recap — investigators raided Cohen's office, home and hotel room in early April. The complication in this case is Cohen is a lawyer, so some of those materials could be covered by attorney-client privilege.

The government wants to designate a secondary team of prosecutors to review the materials and determine what items are off-limits for the prosecutors investigating Cohen.

Attorneys for Cohen, the Trump Organization and his highest-profile client, President Donald Trump, submitted letters to the court explaining how they'd review all the documents to determine what's privileged.

Cohen's team has a group of 27 attorneys and technology professionals at the ready.

Lawyers for the Trump Organization have an external company ready to review, as well as eight lawyers and two paralegals.

Lawyers representing President Trump have two external companies and their own attorneys lined up to look over all the documents. Plus, they told the court the president "will make himself available, as needed, to aid in our privilege review on his behalf."

But there's more. The judge overseeing the case might appoint a special master — a third party that would review the documents to determine what is privileged. Ultimately, it's the judge's decision and she might make a ruling as soon as Thursday afternoon.