'Jumanji' Finds Its Way Back To No. 1 During A Slow Super Bowl Weekend 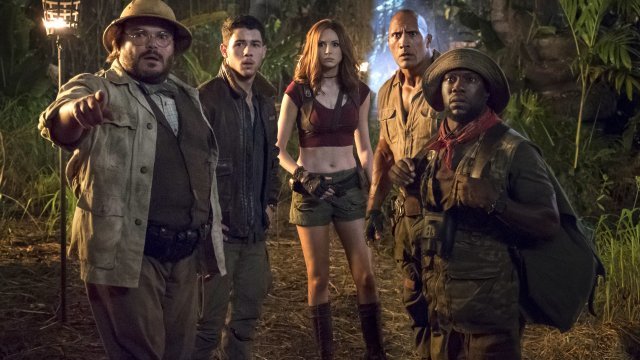 "Jumanji" has managed to top the box office in five of the seven weekends it's been in theaters.

Well, it's Super Bowl weekend, so you know what that means. It's more people watching the Puppy Bowl than going to your local movie theater. With that in mind, we're going to keep this quick.

Climbing its way back to the No. 1 spot this week is "Jumanji: Welcome to the Jungle," bringing in an estimated $11 million. "Jumanji" has managed to top the box office in five of the seven weekends it's been in theaters.

It's also shaping up to be the highest-grossing domestic movie in both The Rock and Kevin Hart's box-office careers.

Hart's highest-grossing film is currently "The Secret Life of Pets," which brought in $368 million. For Dwayne Johnson it's "Furious 7" with $353 million.

"Jumanji" will pass "Furious 7" by next weekend, and many analysts think it could move past "The Secret Life of Pets" before its domestic run ends.

Falling to the No. 2 spot this week is "Maze Runner: The Death Cure," bringing in an estimated $10 million in its sophomore weekend.

Taking the No. 3 spot is the only new film to hit theaters this weekend. "Winchester" brought in an estimated $9 million in its first week out.

Winning at the multiplex on Super Bowl weekend is already a tall order, but it gets significantly more difficult when your Rotten Tomatoes score is stuck in the single digits.

"It’s hard to imagine that scenes of Jason Clarke trying to convince Helen Mirren that she's insane would be dramatically inert, but here we are," IGN's William Bibbiani said.

And with that, happy Super Bowl Sunday, everyone — I'm off to eat wings, drink beer and stick pins in my Tom Brady voodoo doll.

As for next week, Mr. and Mrs. Grey put your honeymoon, house and car to shame.