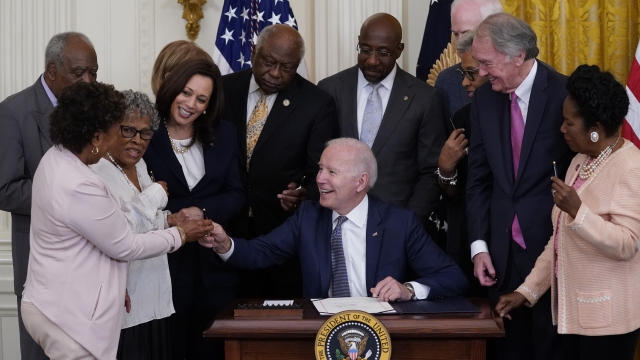 Juneteenth, celebrated June 19th, is the date when the last enslaved Black Americans in Texas finally learned they were free following the Civil War.

Congress has passed resolutions commemorating Juneteenth for decades, but the day will take on new significance this year after becoming a federal holiday.

It's the day, celebrated on June 19th, when many of the last enslaved Black Americans in Texas finally learned they were free following the Civil War.

“Abraham Lincoln sat down and wrote the Emancipation Proclamation to be effective January 1, 1863,” explained House Majority Whip Jim Clyburn, a South Carolina Democrat, at an engrossment ceremony for the bill.

“Because of a lack of communication, it was not until June 19th, 1865, that the word got to Texas,” he continued.

The holiday is already recognized in dozens of states, but the push to create a paid federal holiday in Congress is relatively recent.

Last June, during the protests on racial justice, lawmakers in the House and Senate from both parties introduced bills to make Juneteenth the first new federal holiday in nearly four decades,  since Martin Luther King Junior’s birthday was made a federal holiday in 1983.

In the Senate, the measure was blocked by Republican Senator Ron Johnson, “By naming it a national holiday, it gives federal workers a paid day off that the rest of Americans have to pay for,” Johnson said, during a speech on the Senate floor in July 2020, opposing the measure.

This year the same bill was reintroduced, and on Tuesday Sen. Johnson changed his tune, saying in a statement: “... there is no appetite in Congress to further discuss the matter” and dropping his objection.

Just hours later, the Senate Majority Leader, Chuck Schumer, passed the measure by unanimous consent, effectively a vote of 100 to zero in the Senate.

The next day, the House debated the measure, which garnered broad bipartisan support, passing with a vote of 415-14.

All fourteen votes against the measure were Republicans, with some saying they’re concerned with the bill’s language declaring the day “Juneteenth National Independence Day” as overly divisive and the speed by which it passed the House.

Hours before President Biden signed the measure Thursday, the U.S. Office of Personnel Management announced in a tweet that federal employees will be able to observe the holiday this year, with a paid day off on Friday, June 18th, since Juneteenth this year falls on Saturday.