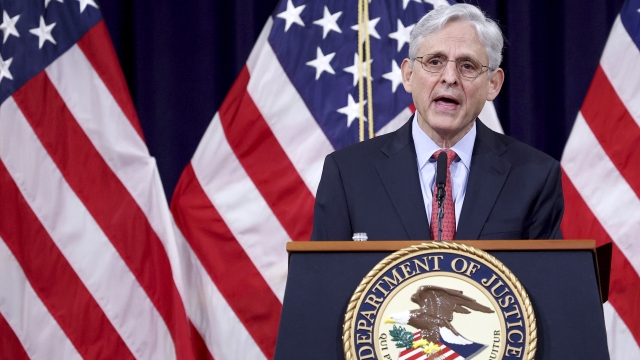 The move comes as pressure grows on the Biden administration to respond to GOP-backed laws being pushed in the states this year.

The Justice Department is suing Georgia over the state's voting laws, a person familiar with the matter said Friday.

The announcement will be made later Friday by Attorney General Merrick Garland. It comes two weeks after Garland said the Justice Department would scrutinize a wave of new laws in Republican-controlled states that tighten voting rules. He pledged to take action if prosecutors found unlawful activity.

The person was not authorized to discuss the matter publicly before the official announcement and spoke on condition of anonymity.

The move also comes as pressure grows on the Biden administration to respond to GOP-backed laws being pushed in the states this year. An effort to overhaul election laws was blocked this week by Republican senators.

As of mid-May, 22 restrictive laws had passed in at least 14 states, according to the Brennan Center for Justice, which researches voting and supports expanded access.

The increased enforcement of voting rights laws also signals that Biden and Assistant Attorney General Kristen Clarke — who was one of the nation’s leading civil rights attorneys before her nomination to lead the department's civil rights division — are making good on a promise to refocus the department around civil rights after a tumultuous four years during the Trump administration.

While much of the more controversial aspects of Georgia's new voting law were dropped before it was passed, it is notable in its scope and for newly expansive powers granted to the state over local election offices.

Under the bill, the GOP-dominated legislature gave itself greater influence over a state board that regulates elections and empowered that board to remove local election officials deemed to be underperforming.

That has raised concerns that the state board could intervene in the operations of Democratic-run county election offices in metro Atlanta, the state’s Democratic power center.

The bill also adds a voter ID requirement for mail ballots and will result in fewer ballot drop boxes in metro Atlanta.