'Justice For All': Many Young Protesters Want A New Strategy 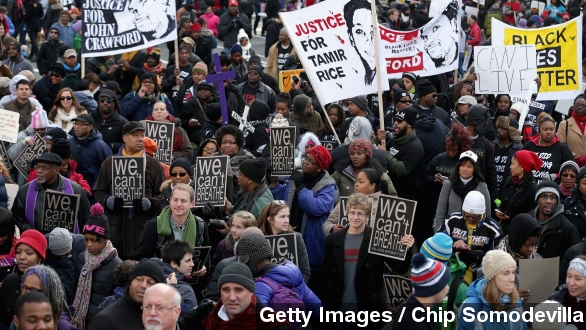 Reverend Al Sharpton led thousands of marchers to the National Mall to protest discrimination, but some younger protesters want a change in strategy.

Saturday brought out thousands of protesters to the National Mall in Washington, D.C. for the "Justice for All" march.

According to its website, the National Action Network aims "to promote a modern civil rights agenda that includes the fight for one standard of justice, decency and equal opportunities for all people regardless of race, religion, nationality or gender"

But as a BBC reporter notes, protesters were pushing a lot of messages at Saturday's peaceful march — so many that it was difficult to hone in on the major issues.

As mentioned, Al Sharpton lead the march from downtown Washington to the U.S. Capitol.

He's a voice and face we've continuously seen as this new wave of a modern-day civil rights movement has gained stem.

"I saw a black man put his hand on the Bible and become president. But I've also been inspired today when I see young white kids holding up signs," said Sharpton via Sky News.

But Sharpton's focus and tactics are not without critics, some of whom think the reverend is not the right man to lead these protests.

"I think there is a divide in that sense that they feel people like Al Sharpton and his supporters and his organization is much more institutional and that it hasn't produced the results that frustrated young people want to see," said Paul Workman with CTV.

That tension between old and young demonstrators was especially obvious when more than a dozen young protesters who said they were from Ferguson came on stage with a bull horn and demanded to be heard.

Organizers did let one woman in that group speak. And when she did, she called the rally a show and said no real action was being taken. But if the march in Washington isn't the answer, is there a better way?

We have seen other forms of protest, like die-ins.

As well as smaller, peaceful protest like some of those in Ferguson, Missouri where Michael Brown was shot and killed in August.

Much of those were not shown in the news, which seemed to focus heavily on the violence. (Video via CNN)

"This is a movement of today. ... We communicate with one another. ... The die-ins, this is a visual, this allows our grandmothers to understand what we're going through as a generation," said Carmen Perez with The Gathering for Justice on MSNBC.

"No justice, no peace." And as the march in Washington took place, thousands of young protesters opted to head to New York City for what they call "A Day of Anger."

The protest's organizer explained, "We want people to shut down their cities for justice. We are continuing where the freedom fighters of the Civil Rights Movement left off. We are a new generation of young multi-­racial activists willing to take up the torch and we’re not going to stand for this anymore.”