Justin Timberlake And Jimmy Fallon To Reunite On SNL 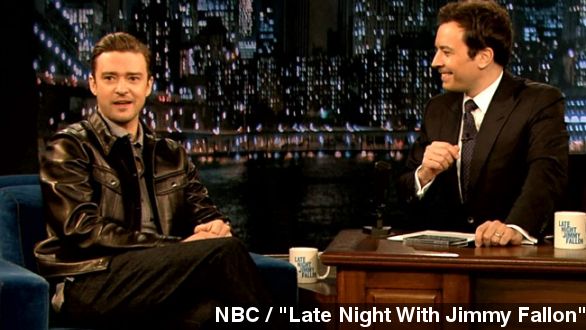 Saturday Night Live announced its December lineup of hosts and musical guests Thursday, and the Dec. 21 pairing is a match made in sketch show heaven — Jimmy Fallon as host, Justin Timberlake as musical guest.

Fallon, a regular SNL cast member from 1999-2004 and the current host of "Late Night", is back for a second hosting stint, while this will mark JT's fifth time as a musical guest. And if past history is any indication, he'll show up in at least one -- maybe every -- sketch. (Via  Uproxx, RCA Records / Justin Timberlake)

Both performers have won Emmys for their past appearances on SNL, but it's the prospect of a team-up that's turning heads. The pair have already struck SNL gold with past sketches like The Barry Gibb Talk Show.

And then there was the time JT hung out with Fallon on "Late Night" for an entire week, which gave us this.

All told, it's easy to understand why people are excited about what USA Today terms "America's favorite Bromance."

And hosting SNL could give Fallon a nice change of pace before his big career move. The "Late Night" host is getting ready to take over The Tonight Show in February, when current host Jay Leno steps down. (Via New York Daily News)

The JT/Fallon team will wrap up a star-studded three weeks for SNL. On Dec. 7, Anchorman 2 star Paul Rudd will host the show with the band One Direction, and John Goodman is hosting on Dec. 14 alongside Kings of Leon.