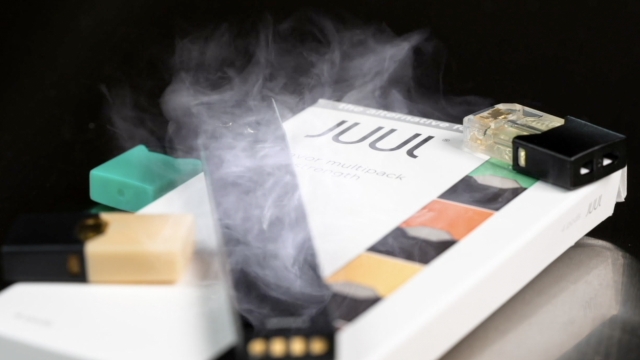 The popular e-cigarette company is taking away mango, creme, fruit, and cucumber flavors from online retail.

On Thursday, Juul Labs Inc. announced it will stop selling non-tobacco and non-menthol-based flavored e-cigarettes. It's taking away mango, creme, fruit, and cucumber flavors and will only sell mint, tobacco and menthol flavors from now on.

Those flavors were already taken out of stores in Nov. 2018 amid the FDA's concern of "epidemic" levels of teen vaping, but now those flavors won't be available online either.

This is the latest move by the company's new CEO, K.C. Crosthwaite, who's leading a broad review of Juul's practices and policies. The previous CEO stepped down following reports of a federal criminal investigation into the company. The move comes amid a national epidemic of lung-related injuries and even deaths related to vaping.

Crosthwaite says this initiative along with many others will hopefully regain society's trust of Juul Labs Inc. Back in September, the company cut all broadcast, print and digital advertising in the U.S., stopped active support of Proposition C in San Francisco – which authorizes and regulates the selling and marketing of e-cigarettes – and refrained from lobbying the Administration on its draft flavor guidance. Juul said it vows to fully support and comply with any final policy the administration might make, when effective.

He said: “We must reset the vapor category by earning the trust of society and working cooperatively with regulators, policymakers, and stakeholders to combat underage use while providing an alternative to adult smokers.”

Advocates say e-cigarettes are important to help adults curtail their addiction to traditional cigarettes, but many critics have blamed companies for targeting minors with fruit and candy flavors that minimize how harmful and addictive vaping could be.

Just on Wednesday, Juul was hit with its first wrongful death lawsuit by a mother who lost her 18-year-old son to "breathing complications" after he "became intensely addicted" to Juul products.

Last month, the Trump administration announced there would be FDA reviews and regulations to remove all flavored e-cigarettes from the market, but it hasn't released anything yet. Some states have taken action into their own hands to ban flavored e-cigarette products amid rising numbers of injury and deaths.

The CDC has confirmed 33 deaths related to vaping and over 1,400 lung injury cases. There hasn't been one substance or product found linked to the recent injuries or deaths, but health officials ask people to "consider refraining" from using e-cigarette products during their ongoing investigations.