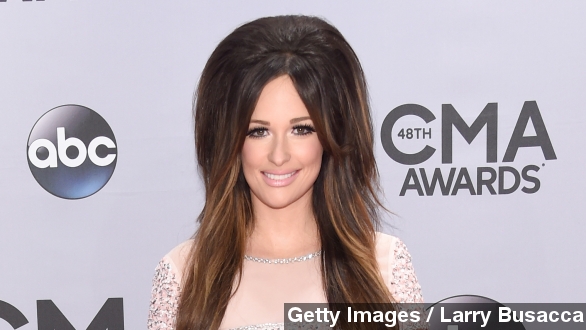 The songstress wore high-risin' hair at Wednesday night's awards show. But, the hair was not without purpose.

Higher the hair, closer to God. Let me hair ya! Hairrrrr’s Kacey!

So Kacey Musgraves got lots of attention Wednesday night for her hair at the CMAs.

And don’t think that’s unintentional. It’s not bedhead. Kacey’s actually doing what I like to call ‘Bjorkin’ it.’

Bjorkin’ it, an ancient celebrity technique, is the practice of wearing a bizarre look to an awards show for the purpose of attracting buzz.

Now, this is not to be confused with accidental buzz, like what Anne Hathaway got with her near-nipples at the Oscars. Too subtle to be a Bjork.

And to be fair, some people were Bjorkin’ before Bjork. Mostly utilizing nakedness.

Who can forget Jennifer Lopez’s plunging Versace gown. She wore it to the Grammys in 2000. Years later, it went on display at the Grammys museum.

In 1998, Rose McGowan went even more naked to the Video Music Awards. Strings of material, a sheer front and a g-string were all that covered her. EW quotes her as saying, “I wore it to cause an uproar.”

Shocker. There was also Lil Kim, who left little to the imagination at the VMAs in 1999. Her outfit became Miley Cyrus’ 2013 Halloween costume.

You’ll note a trend here: the VMAs. Straying away from nudity and just foregoing skin, Lady Gaga wore that much-talked-about meat dress to the always-controversial awards show in 2010.

The most daring celebs ‘Bjork’ at the classier awards shows — like the Oscars.

Recall Cher’s look at the Academy Awards in 1987. And by “look,” we mean “headdress.” The Daily Mail dubbed it one of the worst of all time.

But that’s the thing — these looks might be bad, but they get big buzz — and Bjork and her bird were the bravest of all.