Kamala Harris The Prosecutor: Progressive Or Tough On Crime? 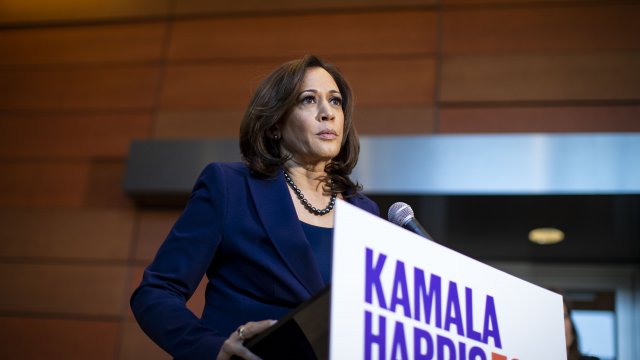 Sen. Kamala Harris is planning to run for president as a progressive prosecutor, but her history in California is checkered.

In an increasingly crowded progressive presidential primary field, Democrats like Sen. Kamala Harris are looking to set themselves apart. The former district attorney and attorney general from California is looking to bill herself as a progressive prosecutor. But experts say that isn't entirely accurate.

Former political science professor Terri Givens says says Harris will need to push her progressive credentials to win the Democratic base. In many cases, she's got them. Harris refused to defend Proposition 8, which would ban same-sex marriage; went after big banks; and even created Back on Track, a program working to help prevent young people from spending time in jail and prevent future convictions.

Still, those like law professor Lara Bazelon say Harris needs to have a reckoning with herself and her record.

"She should stop calling herself a progressive prosecutor, because she was not," Bazelon said. Bazelon says Harris has a long list of inconsistent decisions to explain. As California's attorney general, she appealed a decision deeming the death penalty unconstitutional. Yet Harris ran for San Francisco District Attorney 15 years ago on an anti-death penalty platform. When a 21-year-old shot and killed a police officer, she refused to seek the death penalty.

While attorney general, her office mandated the use of body cameras for its officers. Harris opposed a statewide mandate for all departments.

Bazelon says Harris' worst offense is her history with wrongful convictions, most notably with George Gage, a man convicted of sexually abusing his stepdaughter. After the conviction, the judge found "potentially exculpatory evidence," but Harris defended the conviction during the appeal.

While Harris plans to pursue a progressive agenda, Givens says her moderate record could actually be a positive in some states and portions of the country. For that reason, she doesn't think Harris will shy away from her past.

"She knows once she gets to the general election, that's going to play well for her," Givens added.

Newsy reached out to Sen. Harris' campaign for comment but did not hear back.