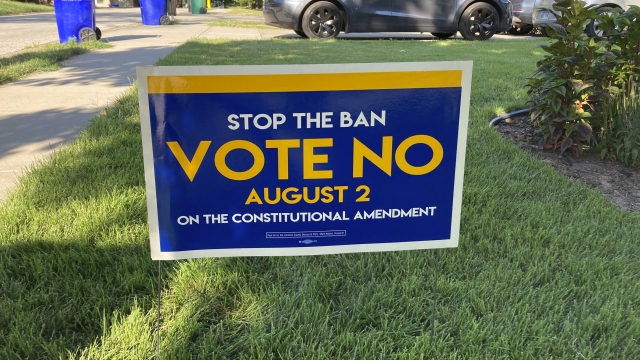 Kansas is the first state to vote on altering the language of the state constitution on abortion, since the Supreme Court overturned Roe v. Wade.

Elections in ruby red Kansas don't normally have much drama. But that's not the case this time. Tuesday voters will decide who should decide the state's abortion rights — and it could have rippled effects across the country.

Vania Soto, a muralist, spends her evenings creating murals all over the Kansas City area to remind people  of what's at stake.

"It's very stressful to think that that freedom is on the line. It's heartbreaking to think that we're going backwards," Soto said.

Kansans are voting to alter the language of the state constitution — making it the first state to vote on abortion since the Supreme Court overturned Roe v. Wade.

"I want them to take this as an empowerment and to know that they're not alone. There's a whole community, even businesses that are not afraid to speak out loud or to put something as dramatic as a uterus in their windows to let their customers know that they're with us," Soto said.

The question voters will answer on the ballot is a bit confusing. A yes vote means there is no constitutional right to an abortion. A no vote means there is. If it passes, the veto-proof, Republican-controlled legislature can write laws about abortion. And while advocates for the measure are downplaying what they'll do, Sandy Brown, the president of the Kansas Abortion Fund, says legislators have made it pretty clear.

This amendment didn't just spring up in light of the Supreme Court's decision – it's been in the works for about three years. The Kansas Supreme Court ruled in 2019 that the state constitution's Bill of Rights "affords protection of the right of personal autonomy, which includes the ability to control one's own body."

Brittany Jones says that decision impacted this issue beyond the sunflower state.

"Because of that ruling, we were even more a destination for abortion. And that's why it's even more important that we passed this, to protect our state from becoming another unlimited, unregulated destination state," Jones said.

And it's only been exacerbated by the overturning of Roe. Missouri and Oklahoma have already outlawed abortion, and women in Iowa and Nebraska will likely see restrictions soon.

"Missouri, Oklahoma, Arkansas, Texas, all of those patients are now coming to Kansas. There are only so many doctors who can provide abortion care. There's a there's a scarcity of medical staff. And many of those patients are coming from other states. And they're stretched thin," Brown continued.

While Kansans haven't sent a Democrat to Washington in almost nine decades, a recent poll shows Kansans are sharply divided on this issue. 49% agree with the recent Supreme Court decision, compared with 46% who don't — and that number is reflected in polling on this amendment. About a third of Kansans believe there should be no restrictions on abortion.

The vote is expected to be close. Both sides including the Catholic Archdiocese of Kansas City, have poured millions into these campaigns, and it appears to have worked. Voter registration and early voting turnout skyrocketed in what normally would be a quiet primary cycle.

"This is a case where every single vote counts, every one," Brown said.