Kardashian And West To Marry At Palace Of Versailles? 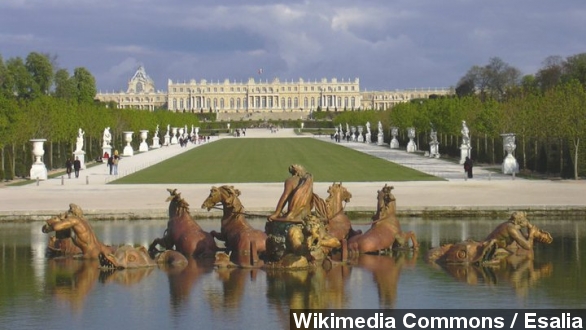 Kim Kardashian and Kanye West are reportedly going to get married at Versailles, although Kardashian's rep says the couple hasn't chosen a villa.

Immediate reaction to this story: Didn't see it coming, but it's totally, insanely perfect.

Because it's totally insane. According to Us Weekly, Kim Kardashian and Kanye West are going to get married at Versailles.

Yes, Versailles. The French palace. From the Hall of Mirrors to the decadent gardens, one of the most extravagant places on Earth. (Via Chateau de Versailles)

But hey, Kanye and Kim know nothing about extravagance, right? (Via San Francisco Chronicle)

Rumors had been swirling since West and Kardashian got engaged that their wedding would be, well, massive. (Via Daily Mail)

He's even joked that fighter jets will be involved. (Via USA Today)

Still, E! Online is reporting that Kim's rep says the couple has not decided on a wedding location yet. So the rumors continue to swirl.

Kardashian already had a massive, televised wedding to Kris Humphries a few years back — but West has never been married.

And as much as he hates the media, West has said he will televise their wedding for the right price. (Via Hollywood Life)

And getting married at Versailles isn't totally unheard of. The daughter of India's richest person, a billionaire, held an engagement ceremony there. Their wedding festivities reportedly cost $78 million altogether. (Via Time)