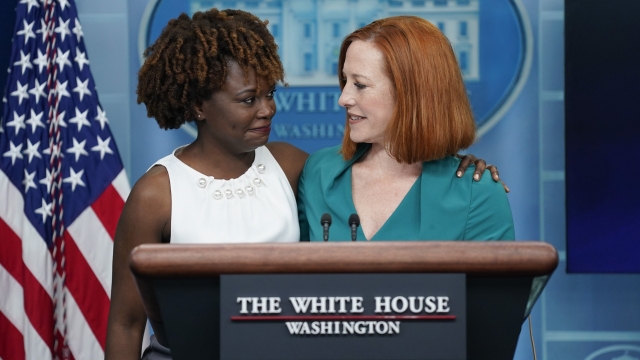 Jen Psaki said goodbye to the White House Friday after taking reporter's questions nearly every weekday of the almost 500 days of Biden's presidency.

The new White House press secretary Karine Jean-Pierre begins her first full week on the job Monday. She's the first Black woman and first openly LGBTQ person to fill the role and has been a long-time adviser to the Biden's. She also served in several roles within the Obama administration.

President Joe Biden has named Karine Jean-Pierre to be the next White House press secretary, with incumbent Jen Psaki set to leave the role next week.

Psaki bid an emotional farewell to the White House and the press corps Friday on her last day as President Joe Biden's spokesperson.

Psaki is leaving the White House after having answered reporters' questions nearly every weekday of the almost 500 days that President Biden has been in office.

Psaki told reporters Friday that when she took the job, she and President Biden discussed the "importance of returning integrity, respect and civility to the White House."

"That does not mean that we haven't let our Irish side show, mine and the president's, as well from time to time. I recognize that. But on my best days and as I look back, I hope I followed the example of integrity and grace that they have set for all of us and do that for all of us every day," she said.

Psaki also thanked the press corps for working to ensure the nation's democracy is alive and well.

"I want to thank all of you in this room. You have challenged me. You have pushed me. You have debated me. And at times we have disagreed. That is democracy in action. That is it working. Without accountability, without debate, government is not as strong," she said.

Jean-Pierre takes over at a time when President Biden's approval rating has dropped to a new low.

According to a poll conducted by NBC News, only 39% of Americans approve of the job the president is doing.