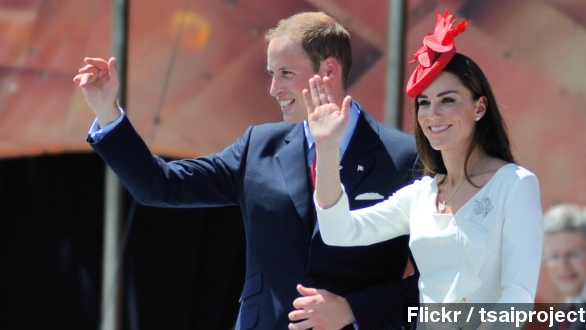 According to prosecutors in the trial against UK tabloid News of the World, Kate Middleton's phone was hacked by the paper and used to get exclusive stories. (Via ABC)

"He left a voicemail saying (quote) 'Hi baby it's me' ... He goes on to say he's had 'a busy day in the woods chasing shadows getting horribly lost and getting almost shot at.'" (Via CNN)

The voicemails are reportedly from before the couple was married. In one, the prince calls Kate "babykins."

The Guardian writes, "This nickname then appeared in an 'exclusive' by Goodman on 12 February 2006 which went on to say that 'Wills wants the girl he calls 'babykins' to be his princess'."

The newspaper has been shut down since 2011 when reporters were first accused of hacking into the voicemail of kidnapped teenager Milly Dowler who was later found murdered. (Via Sky News)

"This is disgraceful, disgusting there are no words to describe how awful this was how awful it is to the parents" (Via ITN)

Now former editors from the News of the World find themselves on trial for a number of offenses including conspiracy to illegally intercept voicemails. (Via BBC)

The Duchess of Cambridge is by far the highest profile alleged victim of phone hacking to date.

According to the New York Times, "Past allegations of royal hacking have focused on interception of their aides’ voice mail messages."

The defendants from News of the World deny all the charges against them, the trial is ongoing.