Kazakh President: Forces Can Shoot To Kill To Quell Unrest 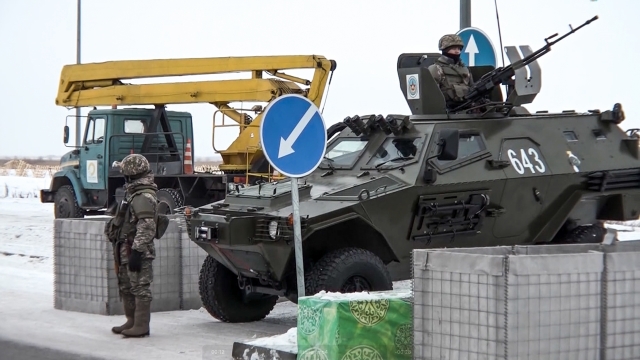 On Friday, Kazakhstan's Interior Ministry reported that security forces have killed 26 protesters during the unrest, which escalated on Wednesday.

Kazakhstan's president authorized security forces on Friday to shoot to kill those participating in unrest, opening the door for a dramatic escalation in a crackdown on anti-government protests that have turned violent.

The Central Asian nation this week experienced its worst street protests since gaining independence from the Soviet Union three decades ago, and dozens have been killed in the tumult. The demonstrations began over a near-doubling of prices for a type of vehicle fuel and quickly spread across the country, reflecting wider discontent with authoritarian rule.

In a televised address to the nation, President Kassym-Jomart Tokayev used harsh rhetoric, referring to those involved in the turmoil as "terrorists," "bandits" and "militants" — though it was unclear what led the peaceful protests to first gather steam and then descend into violence. No protest leaders have emerged so far.

"I have given the order to law enforcement and the army to shoot to kill without warning," Tokayev said. "Those who don't surrender will be eliminated."

Concerns grew in recent days that an even broader crackdown might be coming, as internet and cellphone service was severely disrupted and sometimes totally blocked, and several airports closed — making it difficult to know what was happening inside the country and for images of the unrest to reach the outside world.

Adding to those fears was Tokayev's request for help from a Russia-led military alliance, the Collective Security Treaty Organization, whose troops began arriving Thursday.

On Friday, Kazakhstan's Interior Ministry reported that security forces have killed 26 protesters during the unrest, which escalated sharply on Wednesday. Another 26 were wounded and more than 3,800 people have been detained. A total of 18 law enforcement officers were reported killed, and over 700 injured.

The numbers could not be independently verified, and it was not clear if more people may have died in the melee as the protests turned extremely violent, with people storming government buildings and setting them ablaze.

More skirmishes in Almaty were reported on Friday morning. Russia's state news agency Tass reported that the building occupied by the Kazakh branch of the Mir broadcaster, funded by several former Soviet states, was on fire.

In other parts of the country, the unrest appeared to be dying down. On Friday morning, news reports said the internet was partially restored in the capital, Nur-Sultan, but it remained unclear for how long. Officials also announced resuming previously halted train services.

The Almaty airport — stormed and seized earlier by the protesters — was back under the control of Kazakh law enforcement and CTSO forces, Russian Defense Ministry spokesman Maj. Gen. Igor Konashenkov said. But the facility will remain shut at least until Sunday, the Kazakh TV channel Khabar 24 reported, citing the airport's spokespeople.

Curfews remained in place in cities, and Tokayev tweeted on Friday night that "the counter-terrorist operation continues in our country," with police, the National Guard and the armed forces carrying out "large-scale and well-coordinated work" to restore "law and order."

Hours before he authorized the use of lethal force against those participating in unrest, Tokayev indicated that some measure of calm had been restored, saying "local authorities are in control of the situation."

Tokayev has vacillated between trying to mollify the protesters — including issuing a 180-day price cap on vehicle fuel and a moratorium on utility rate increases — and threatening harsh measures to quell the unrest.

As he vowed a tougher response, he called on the CSTO alliance for help. A total of 2,500 troops have arrived so far, all of them in Almaty, Kazakh media reported, citing foreign ministry officials.

Kazakh officials have insisted that troops from the alliance, which includes several former Soviet republics, will not be fighting the demonstrators, and instead will guard government institutions. It wasn't immediately clear whether the foreign troops deployed thus far were involved in suppressing the unrest.

The involvement of CSTO forces is an indication that Kazakhstan's neighbors, particularly Russia, are concerned the turmoil could spread.

In his address to the nation, Tokayev repeated his allegations that "foreign actors" along with "independent media" helped incite the turmoil.

He offered no evidence for those claims, but such rhetoric has often been used by former Soviet nations, most prominently Russia and Belarus, which sought to suppress mass anti-government demonstrations in recent years.

Kazakhstan, which spans a territory the size of Western Europe, borders Russia and China and sits atop colossal reserves of oil, natural gas, uranium and precious metals that make it strategically and economically important — and the crisis sparked concern in many quarters.

Ursula von der Leyen, the European Commission president, said she was following the developments with a "great worry," while French president Emmanuel Macron called for de-escalation.

In Germany, Foreign Ministry spokesman Christofer Burger said officials were looking into the reports of Tokayev's shooting order. From Germany's point of view, "it must be said very clearly that a use of lethal force, of live ammunition against civilians can only be a very last resort, particularly if military forces are deployed."

U.S. Secretary of State Antony Blinken said Washington had "questions about the nature " of what CSTO has described as a peacekeeping mission in Kazakhstan.

"It would seem to me that Kazakh authorities and governments certainly have the capacity to deal appropriately with protests, to do so in a way that respects the rights of protesters while maintaining law and order. So it's not clear why they feel the need for any outside assistance," Blinken said.

Asked about Tokayev's shoot-to-kill orders, U.N. spokesman Stephane Dujarric reiterated the importance of "a stop to the violence" and called for respecting "human rights and international standards while re-establishing public order."

But China appeared to step up its support for Kazakhstan's government on Friday.

Kazakhstan is a critical component in China's "Belt and Road" overland connection to Europe and persistent unrest in the country could upend Beijing's hopes for closer trade and political relations with the continent.

Chinese President Xi Jinping expressed his condolences to Tokayev over the "large-scale riot," praising him for having "decisively taken strong measures at critical moments and quickly calming down the situation."

"As a fraternal neighbor and a long-term strategic partner, China is willing to provide necessary support within its means to Kazakhstan to help it get over this difficult period," Xi said.

Despite Kazakhstan's vast resource wealth, discontent over poor living conditions is strong. Many Kazakhs also chafe at the dominance of the ruling party, which holds more than 80% of the seats in parliament.