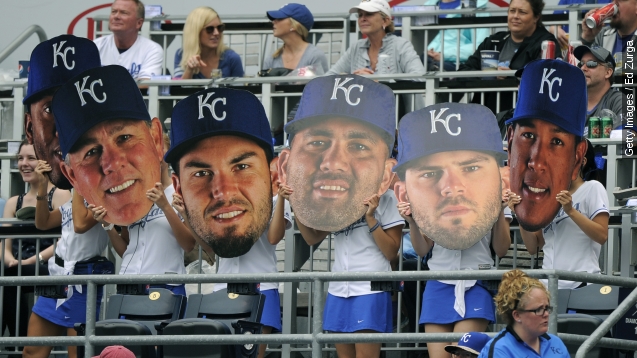 Around this time last year, the Kansas City Royals were floating just below .500, likely on track to miss the playoffs yet again, and many sports fans outside the Midwest probably couldn't name a single player on the team.

What a difference a year makes. Tuesday, Major League Baseball released its updated All-Star ballot returns and it's safe to say "The Boys in Blue" are a bit more popular this season.

Five Royals players are leading All-Star voting in their respective positions: Alcides Escobar, Mike Moustakas, Salvador Perez, Lorenzo Cain and Alex Gordon. All but one of those players boasts more than a million votes thus far.

Catcher Salvador Perez, who's a two-time All-Star, has the most votes of any player in the American League at more than 1.4 million.

Since losing the World Series to the Giants last season, many critics viewed the Royals as kind of a one-hit wonder in the baseball world. But after an explosive start to this season, people are starting to take notice that the teams' winning ways aren't a fluke.

Kansas City is currently atop the AL Central Division and is battling for the best record in baseball, aided once again by a lights-out bullpen and incredible defense.

But, this season, they also bulked up their offense with the addition of Kendrys Morales, who's leading the AL Central in RBIs.

All the while, home-grown talent like Alex Gordon are becoming household names.

The sports media has taken notice too. First baseman Eric Hosmer, who leads the team in home runs and on-base percentage, graces the cover of June's Sports Illustrated.

As far as the ballots go, there's still a lot of baseball to be played before we reach the Midsummer Classic, so the rankings could change. All-Star balloting closes just before midnight on July 2.