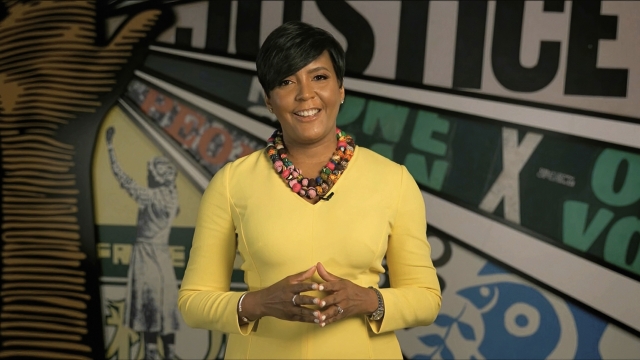 Recently, President Joe Biden announced details of a plan to create safer communities amid growing violence. It's what the White House is calling the "Safer America Plan." This proposal calls for $37 billion as part of the president's 2023 budget and outlines where and how the funding would be spent. The plan, however, will need to be approved by Congress. Keisha Lance Bottoms, senior adviser to the president for public engagement and the former mayor of Atlanta, joined Newsy's "Morning Rush" to talk more about the plan.

NEWSY'S ROB NELSON: Thanks so much for giving us some time. Good morning to you.

KEISHA LANCE BOTTOMS: Thank you for having me. Good morning.

NELSON: And for all the good folks in Atlanta who are watching and, of course, know very well who you are, give us a description of what exactly this new job is for you.

BOTTOMS: Well, it's a very different job than serving as mayor of Atlanta. I am serving the president and I have agreed to stay through the midterms to head the Office of Public Engagement. The public may remember a form of this office under President Obama's office that Valerie Jarrett led. It's structured a bit differently under President Biden, but it's the front door to the White House. It's about bringing information in and sending information out and giving the public an opportunity to engage with the work that this White House is doing.

NELSON: Gotcha. Appreciate that and congrats on the job. So this "Safer America Plan" again, talking about almost $40 billion here. As I can tell, the main headlines: Hire and train 100,000 cops, clear out a backlog from our court system — which is largely obviously COVID — related to various intervention programs, anti-violent crime grants, that sort of thing. What for you, though, is the most likely to get through, and what difference does this White House think it would make?

BOTTOMS: Well, as a former mayor, it's my hope that it all gets through. What's so important is that it's not just the hiring of police officers, but also the accountability piece. People in big cities may be used to officers wearing things like body cams when they have interactions with the community. But in many smaller communities across our country, the budgets just don't allow for that type of equipment. Also, what we know is that law enforcement has taken a huge hit over the past several years. It's been very difficult to attract and retain officers. But what we know is that we want officers who want to be engaged with our communities, who want to protect and serve our communities. But the other really important piece is the intervention, piece: Giving funding to cities and states that will allow was to put in place those things that we know work. For example, in Atlanta, there was a pilot program called Cure Violence that we did in a neighborhood in a community in Atlanta with great success rates. The ability to expand programs like that, to engage community partners to provide substance abuse counseling and funding, to help put people on our streets who can engage people when they are having mental health crisis, will be a game changer for cities across America.

NEWSY'S JAY STRUBBERG: President Biden has taken some actions on the issue of guns earlier this year. He released new regulations to crack down on so-called "ghost guns." Those are those homemade guns, to our viewers, that don't have any serial numbers so that they can't track them. They've been linked to a rise in violence. Have you seen any success so far in this initiative to tackle them?

BOTTOMS: Well, we know that the president announced this initiative a few weeks ago and so, we are already seeing progress in that area. There was a story this morning on some arrests made, I believe in Georgia, related to ghost guns. And what's so frightening about that, is that people are able to order these guns and assemble them as a kid. That's very scary for many reasons. And so again, with the president being focused on what our needs and concerns are out of our cities and communities, and asking Congress to support that, will make a difference. What we've seen, especially since the Coronavirus kicked in in 2020, we have seen an uptick in crime across the country. It's not just in big cities. It's in smaller towns across America. And any and everything that this president can do to make sure that we have the resources we need on the ground. Whether it's to combat gun violence, or to make sure that we are able to arrest and prosecute those people who are distributing ghost guns in our communities will certainly make a difference.

STRUBBERG: Does the president plan to go further beyond the bipartisan gun reform that was just passed in Congress? Does he have any plans to advance this issue, to go any stricter with gun laws before the midterm elections?

BOTTOMS: Well, we know that the president has asked Congress to ban assault weapons. President Biden was responsible for the assault weapons ban almost 30 years ago. And what we know from the data is that there was a downward trend in mass shootings when that ban was in place. So, he will continue to push Congress, to ask Congress to support him in that ban. And he has committed to using every single tool that he has in his tool box to make sure that our cities are safer.

NELSON: Also, it struck me in the plans that there's a part here about the grant program for cities and states to help them ease violent crime. It says, "to help ease the burden on police officers by identifying nonviolent situations that may merit a public health response or other response." And that seemed to be a little reminiscent of the conversation sparked by the "defund the police" movement, where it was the idea maybe not every situation warrants an armed officer arriving to the scene — maybe there are different personnel that can get there and make a positive difference. Elaborate on exactly what that part of this plan means.

BOTTOMS: Again, as mayor, I know that that is a huge challenge that we have had in our communities and especially, again, since 2020 where we've seen this uptick in people experiencing mental health crisis. So, having people who can respond appropriately. It's always a good thing to call 911 when there's an issue. But, if there are other places where you can call, whether it's another 3-digit number — whether it's arriving on the scene with the officer as someone who's trained on mental health intervention — we know it will make a tremendous difference because unfortunately, we've seen outcomes across America where people are experiencing a mental health crisis and their encounter with police officers has not always been a positive encounter. But again, with my time as mayor, what we know with our pre-arrest detention program that we had in Atlanta: If we have encounter people who are experiencing a mental health crisis, if we are able to get them the appropriate help, have them assessed, not necessarily sent to jail, but it may be that they need to be referred for mental health counseling. Or, a lot of times, even as a judge, what I encounter is that sometimes people would be experiencing an issue because they didn't have enough insulin. And it would play out in a way that looked as if they were engaging in criminal activity, but there were some other underlying things going on. So, this is going to be tremendously helpful. And I hope that it is also a signal to people on the left and to the right that the president is listening and he will take every opportunity to make sure that communities have the resources they need to address these issues.

STRUBBERG: It certainly seems to be a challenge, because there's plenty of eroded trust between the law enforcement and communities in places like Minneapolis, Chicago, elsewhere in the country after some high-profile shootings. Midterm elections are near. Republicans are pointing to crime as an issue in targeting Democrats for well, some of them on the Progressive side, saying "defund the police." With crime rates up, what can the White House do to help these candidates?

BOTTOMS: Well, I know when I was mayor in 2021, I sat in the White House along with Republican governors and mayors and Democrat governors and mayors, and we expressed concerns that we had coming out of our cities. The concern I expressed from Atlanta was that there was an uptick in crime and we needed resources to help combat this issue. So, the ownership of concern about crime does not belong just to the Republican party. Everyone wants to live in a safe community. Everyone wants a positive interaction with a positive outcome when they encounter law enforcement. So, Republicans don't own that issue. But what I will say, is that the president — whether it's the bipartisan bill that he signed a few weeks ago addressing gun violence or with a plan that he is now asking Congress to support— he's been very clear that he wants to do and wants us to have resources, do everything possible that keep our communities safe, whether it's a red state, blue state, blue city or red city.

NELSON: And I can't let you go without asking someone who knows Georgia politics better than most: Any thoughts on Kemp vs. Abrams? The rematch? And what do you make of the Warnock vs. Herschel Walker matchup in this state, as well?

BOTTOMS: Well, in my new role with the White House — and I have to be very careful wading into the politics of it all — but what I will say is that, you know, from the last election cycle, when people paid attention, when they registered to vote, it made a difference in Georgia. And I hope that that momentum has not been lost.

NELSON: Delicately handled. Keisha Lance Bottoms, senior adviser to the president for public engagement and former mayor of Atlanta. Thanks so much for your time this morning. We sincerely appreciate it.

BOTTOMS: Thank you for having me.