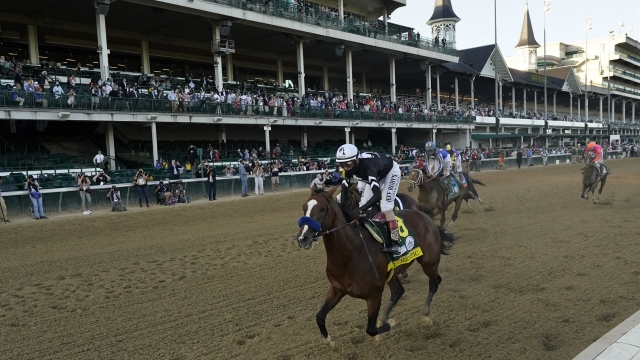 Thousands demonstrated in Louisville carrying signs that read "No Justice, No Derby" and demanding the annual horse race be canceled.

The Kentucky Derby finally ran but without spectators on Saturday after being pushed back four months due to the pandemic. It ended in an upset: Authentic beat Tiz the Law. Outside the track, racial tensions flared as protesters faced off.

The Derby takes place at the Churchill Downs racetrack in Louisville, Kentucky — where for months activists have been calling for justice in the police killing of Breonna Taylor — a 26-year-old Black woman. Louisville police officers shot the emergency room technician in March during a no-knock warrant at her home.

Thousands turned out Saturday before the Derby, with many protesters wanting the race to be canceled, saying it was inappropriate to hold such an event until officers involved in Taylor's death are brought to justice. Kentucky Derby officials responded: "We respect that point of view but made our decision in the belief that traditions can remind us of what binds us together as Americans, even as we seek to acknowledge and repair the terrible pain that rends us apart."

Demonstrators carried signs that said "No Justice, No Derby." One of the organizing groups said the protest was aimed at shifting focus from the race to Taylor's case.

"We wanted the world to see, we wanted everyone to see and understand that we're not happy, we're not satisfied with what the Attorney General is doing, what the mayor is doing. We want justice for Breonna Taylor. While that race was going on, people were forced to pay attention to what was going on outside of Churchill Downs. And we did so non-violently, but we're going to continue to do this."

Earlier in the day, Breonna Taylor supporters verbally clashed with counterprotesters from armed White militia groups. Police separated the two sides and no arrests were made related to the confrontations.